The city of Holyoke, Massachusetts may soon see a city council tradition codified into a rule. If Council President Kevin A. Jourdain gets his way, all meetings from here on out will open with the Pledge of Allegiance followed by a mindless recitation of the phrase “God Bless America, God Bless the city of Holyoke and all its citizens and God Bless the City Council.”

They’ve been saying it for decades already, but Jourdain claims it ought to become a formal part of meetings because it’s a “very unifying statement.”

Sure… if by “unifying,” Jourdain means it excludes everyone who doesn’t believe in the Christian God.

Even when a fellow council member and local constituents objected to his request at a recent meeting, Jourdain doubled-down on his Christian Lives Matter agenda:

“Let’s be crystal clear…. I’m getting a little tired of this, ‘The public says,’ because five people show up at the microphone. The rest of my constituents are out there every day busting their humps working,” unable to take a night off to speak at a City Hall meeting, Jourdain said.

“‘Ma and Pa Kettle,’ working all day or they’re 80 years old and don’t want to come here at night,” he said.

He disagrees, he said, “That that somehow is representative of the public.”

Got that atheists? Your voices are irrelevant because you’re all unemployed bums. Only the silent, working, elderly Christian majority counts.

The five-member Charter and Rules Committee, which Jourdain is on, voted 3-2 to submit the recommendation to a vote of the entire 15-member council on May 2.

No one’s saying this change would be illegal, but it is unnecessary and exclusionary. By passing this, Holyoke is sending a clear message that those who don’t believe in the Christian God are not welcome members of the community.

It’s telling that Jourdain wants to say this line out loud. He could easily say it to himself before a meeting begins, but that’s not good enough. It’s never good enough. For Christians like him, a shout-out to God only counts if other people see him do it. (Just like the Bible says.)

If you live in the community, urge the councilors to vote against this measure. Tell Jourdain to pray on his own time, not when he’s supposed to be working on behalf of the taxpayers.

(Screenshot via YouTube. Thanks to Edward for the link) 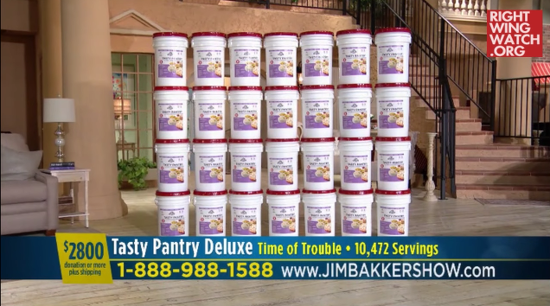 April 25, 2017
Televangelist Jim Bakker: Radical Muslims Are Taking Over America (So Buy My Giant Buckets of Food)
Next Post