Ray Comfort Wrote a Book About His Infamous Banana Video

The book’s not out until September 1, but Ray Comfort sent me an advance copy of Banana Man. It’s all about his infamous argument about how a banana is the “atheist’s worst nightmare,” and what happened after that video went viral. 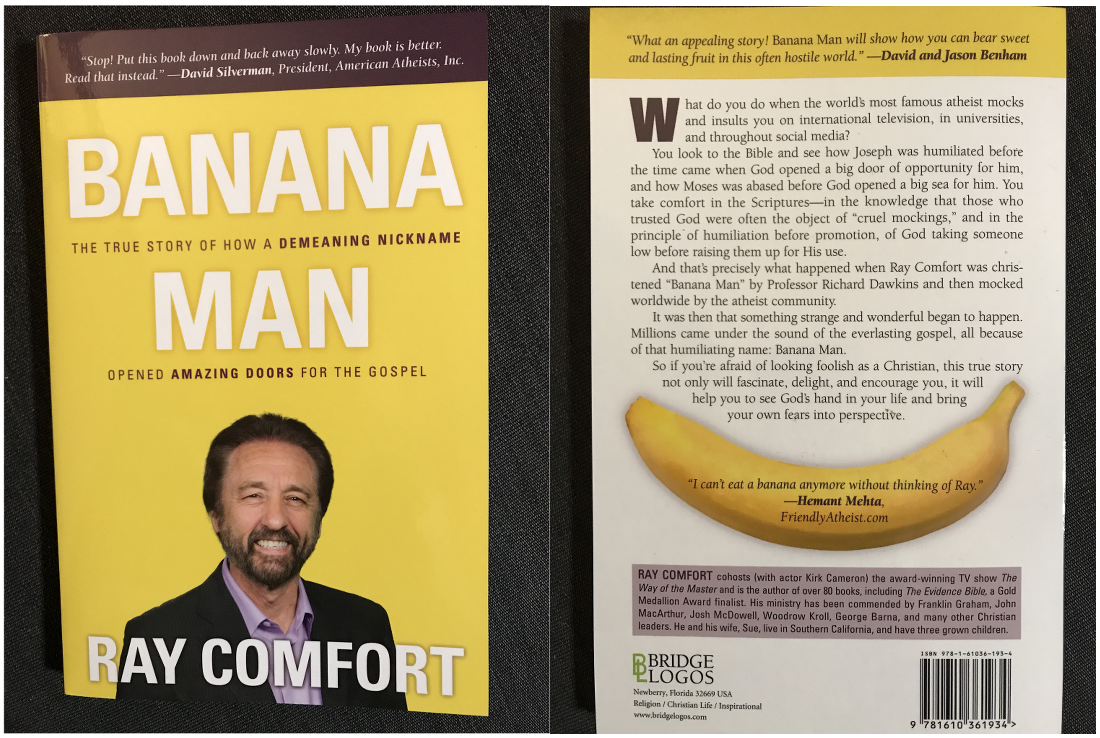 I was half-joking when I sent that blurb, but I’m thoroughly amused that he used it…

I read through the entire book last night. It’s not too long, and as with much of Christian apologetics, it’s almost all stuff we’ve heard before. It’s clear that Ray’s biggest frustration with the Banana video is that it wasn’t shown in context.

Here’s what he wanted to do: In the version of the presentation he gives to Christian audiences, he shows a Coke can, explains how it was intelligently designed by humans to contain the liquid, open up nicely (with the tab), fit in your hand, etc.

Then he shows a banana, which is obviously natural, and claims that God designed it.

Without the Coke can prelude in the video, he says (repeatedly) in the book, the “joke” was lost. But there’s no joke. The banana bit was never funny. It was just bad logic. And as many people have pointed out, the banana Ray used in the video is a perfect example of evolution in action. He writes in the book that he knows that, but the whole bit was a last second inclusion in the video, and he grabbed the only banana he could find near the set. He then adds that an original banana would’ve made his point all the same.

It’s still a bad argument. Nature frequently creates things that have the illusion of design but were not the result of a Higher Power’s blueprint.

One other thing about the book: It’s not long, but it could’ve been much shorter. The actual bits about the Banana Video take up a small portion of the book. The rest of it? Just Ray talking about atheists he’s met and atheists who talk shit about him (hello!). There’s practically a new chapter for every Google Alert on his name. It’s interesting to a point, then it’s repetitive, then it’s annoying. If he didn’t convert you via Banana, the stories aren’t going to do it, either.

It’s the same thing we see in all of his videos, too. Last year, when he released The Atheist Delusion, he promoted it with the tagline “Atheism destroyed with one scientific question.” That question — about how DNA could possibly have come into existence — took up about 20 minutes in the hour-long film. The rest of it was just the usual man-on-the-street interviews and other nonsense.

The only really interesting thing I learned from the book was that Kirk Cameron, Ray’s co-host who’s sitting with him in that infamous clip, urged him not to do the banana bit because “atheists would mock [him] for it.”

Ray insisted they include it. Kirk gamely played along. The rest is history.