How an Atheist Activist Found a Way to Herd Cats and Get a Seat at the Political Table April 11, 2017 Hemant Mehta

Over the course of an activist career that has included running for governor from South Carolina and helping create the Secular Coalition for America, Herb Silverman has never been content to merely promote his beliefs from a keyboard. He takes action in any way he can.

In his new book An Atheist Stranger in a Strange Religious Land (Pitchstone Publishing, 2017), Silverman compiles many essays he’s written for various online publications on the subjects of politics, race, and culture. 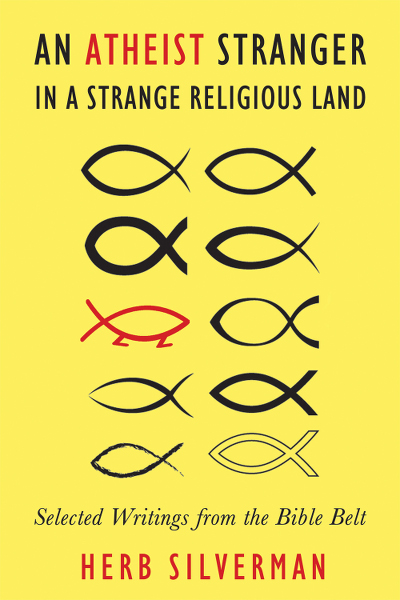 In the excerpt below, Silverman writes about the difficulties of forming the Secular Coalition for America and the backlash it would receive when doing just about anything important.

When I became engaged in freethought activities in 1990, I discovered a number of fine organizations that promoted causes I supported. However, each group was doing its own thing with little backing for worthwhile efforts of others. So in 1998 I contacted the national nontheistic organizations I knew, noting that none was large enough to make a significant impact. I suggested we begin to cooperate, show our strength in numbers, and more effectively counter the political and social threats coming from the religious right.

People with considerably more experience in the movement warned me that getting freethinkers to cooperate was akin to herding cats. My cats put aside personality differences, past grudges, and turf protection when I fed them cat crunchies. I assumed people like Pat Robertson and Jerry Falwell would be freethought crunchies around which we could all enthusiastically rally. After some delicate negotiations and ground rules, leaders from several national organizations met for a weekend in 2000. Afterward, all thought that first meeting had been worthwhile, focusing on the 95 percent we had in common, rather than arguing about the 5 percent that set us apart.

We had trouble choosing a coalition name acceptable to a diverse group of atheists and humanists. “Atheist” gets more attention and “humanist” sounds more respectable. We agreed that either both or neither word would be in our name. (Organizations within our freethought community even disagree on whether to capitalize A(a)theist and H(h)umanist.) We considered Freethought/Atheist/Humanist Coalition, but the acronym (FAHC) sounded a bit unseemly. (This was before the movie, “Meet the Fockers.”) We finally settled on the Coalition for the Community of Reason (CCR).

Though talk is good, I was hoping talk would lead to action. But an inordinate amount of time was spent on whether CCR should be publicly visible or simply a forum to exchange ideas. Even though CCR formed as a cooperative body, some leaders began to view it as a competing organization and withdrew support. The coalition died, which turned out to be a “blessing” in disguise. In 2002, CCR evolved into the Secular Coalition for America. Instead of a loose confederation, it became a formal organization with an activist mission: to increase the visibility of and respectability for nontheistic viewpoints, and to protect and strengthen the secular character of our government. The Secular Coalition filed under a section of the IRS code that allows unlimited political lobbying. Finally, atheists and humanists had a voice in the nation’s capitol.

Our Secular Coalition Visit to the White House

Representatives from the Secular Coalition for America met with White House officials on February 26, 2010 to discuss issues of concern to secular Americans. We were grateful to have a place at the table, with a chance to hear from Obama administration representatives, and for them to hear from us about issues that affect all Americans. This historic meeting marked the first time a presidential administration met for a policy briefing with our nontheistic community.

Here are some grossly unfair but predictable media comments. The advocacy group, “In God We Trust,” ripped the Obama administration “for meeting to plot political strategy with 60 atheist activists.” Its chairman, Bishop Council Nedd, said we represent “some of the most hate-filled, antireligious groups in the nation.” Sean Hannity claimed on Fox News that the Obama administration is giving special treatment to atheists, and that religious groups “have not received this treatment from the Obama White House.” In Hannity’s America, a two-hour meeting with Secular Americans is “special treatment,” but not a recent two-day meeting sponsored by the White House Office of Faith-Based and Neighborhood Partnerships.

The Catholic League for Religious and Civil Rights sent a press release saying “Obama Aides Host Catholic Bashers.” Bill Donohue, its president, ended his diatribe with “It is important that the public learn of the contents of this meeting. We will do what we can to find out what happened.” Apparently, their crack investigative team never thought to contact any Secular Coalition representatives. So for the Catholic League and others who would rather opine than investigate, I’ll make it easy by telling what issues we addressed at the meeting with administration officials.

Military proselytizing and coercion: Ensure that men and women who risk their lives to protect American values are not coerced into religious participation, subjected to proselytizing, or discriminated against because of their beliefs.

Fixing faith-based initiatives: Make certain that religious organizations receiving federal funding for social welfare programs cannot discriminate in hiring, that beneficiaries are not proselytized, and that secular options are made available.

An Atheist Stranger in a Strange Religious Land is available now online and in bookstores. 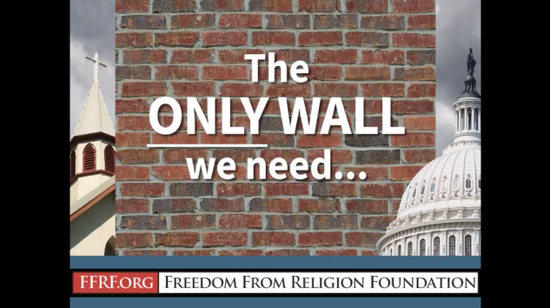 April 11, 2017
"The Only Wall We Need Is Between Church and State," Reads Digital Billboard in Times Square
Next Post

April 12, 2017 Why Would a Church Advertise Easter Sunday Services Like This?
Browse Our Archives
What Are Your Thoughts?leave a comment