For the past two years, Rep. Mike Honda (D-CA) introduced a formal resolution in support of the National Day of Reason. His defeat last November, despite coming at the hands of another Democrat, put future versions of that legislation in peril.

Thankfully, fellow Californian Rep. Ted Lieu is picking up where Honda left off. Lieu just introduced House Res. 263 naming May 4 the National Day of Reason, “recognizing the importance of reason in the betterment of humanity.”

(That’s also the same day as the National Day of Prayer, sponsored by conservative Christian groups, so you know they’ll be thrilled by this development.) 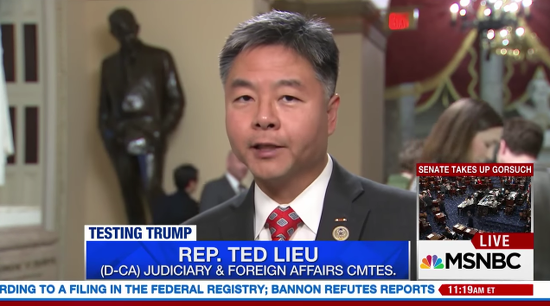 The text of the resolution isn’t available yet, but I suspect it’ll be similar to last year’s version.

Upon introduction of the resolution, Rep. Lieu said: “There is no doubt that emotions and passions play an important role in American politics. They drive elected officials to pursue issues they care about and energize our citizens to participate in our great democracy. But as Jon Oliver said, “graphs aren’t Rorschach tests.” At a time when people are disputing indisputable facts and axing scientific funding, celebrating reason and logic is more important than ever. We will get the best results for society if we formulate public policy using sound logic and rational thought. That is why I am proud to introduce the National Day of Reason Resolution alongside my colleagues Eleanor Holmes Norton (D-DC), Jamie Raskin (D-MD), and Zoe Lofgren (D-CA).”

“Not all Americans pray, but reason is something everyone can unite around,” said Roy Speckhardt, executive director of the American Humanist Association. “While some may seek personal guidance from their religious beliefs, we encourage our elected leaders to use logic, empathy, and equality to protect the freedoms and civil rights of all Americans.”

Yes, it’s a purely symbolic gesture, but at a time when reason is dismissed by the power brokers in Washington, it’s a reminder that there are sensible people out there who take evidence and rational thinking seriously.

Maybe soon, they’ll be in the majority again.

April 7, 2017 Supreme Court Justice Neil Gorsuch May Be the Deciding Vote in a Major Church/State Separation Case
Browse Our Archives
What Are Your Thoughts?leave a comment