Despite Being Eligible for a Huge Tax Rebate, Ark Encounter Has Earned Next to Nothing (So Far) April 6, 2017 Hemant Mehta

Despite Being Eligible for a Huge Tax Rebate, Ark Encounter Has Earned Next to Nothing (So Far)

***Update*** (4/12): Mark Looy of Answers in Genesis points to this comment as being accurate, reiterating that rebate checks will not start coming in until a year after the park’s opening.

Is Kentucky’s Ark Encounter floundering? We may have some evidence that it’s not doing nearly as well as Creationists expected.

First, some quick background: Last April, after more than a year of litigation, the Kentucky Tourism Development Finance Authority officially approved tax incentives worth over $18 million for the Noah’s Ark theme park. Many church/state separation advocates — as well as Kentucky officials — argued the incentives were illegal since Ark Encounter discriminated in their hiring. But in early 2016, a judge said the park’s status as a tourist attraction trumped the fact that it was a Christian park hiring Christian employees.

That meant that, over the course of ten years, Ark Encounter would get back some of the money it was paying the state in sales taxes. The more tickets, food, and other resources they sold to customers, the more they’d get back from the taxpayers, up to $18.25 million over the first decade of business.

That means they’re eligible to receive, on average, $1.825 million a year in rebates.

Dan Phelps, President of the Kentucky Paleontological Society, has been keeping his eye on Ark Encounter ever since the very beginning, and he filed an open records request with the state wanting to see the receipts for how much money taxpayers had given back to the attraction. Specifically, he asked for:

[A]ny and all documents relating in any way to the Kentucky Treasury making sales tax rebates to Ark Encounter in Williamstown, Grant County, Kentucky. Provide me with copies of checks, business records, financial statements, and any and all documents and correspondence with employees, and agents of Ark Encounter, LLC, Answers in Genesis, Inc., and the Creation Museum relating to payments to Ark Encounter, LLC, Answers in Genesis, Inc., and/or the Creation Museum by the Commonwealth of Kentucky from May, 2016 to the present.

In short, Phelps asked for anything and everything the state has given Ark Encounter since just before it opened to the public (on July 7). It’s been almost exactly nine months, so we should expect the state to have given back about $1,368,750 (on average) so far.

Noah R. Friend, the General Counsel for the Kentucky State Treasury, told Phelps that only a single check has been mailed to Ark Encounter since May, and it’s not for a lot of money at all. 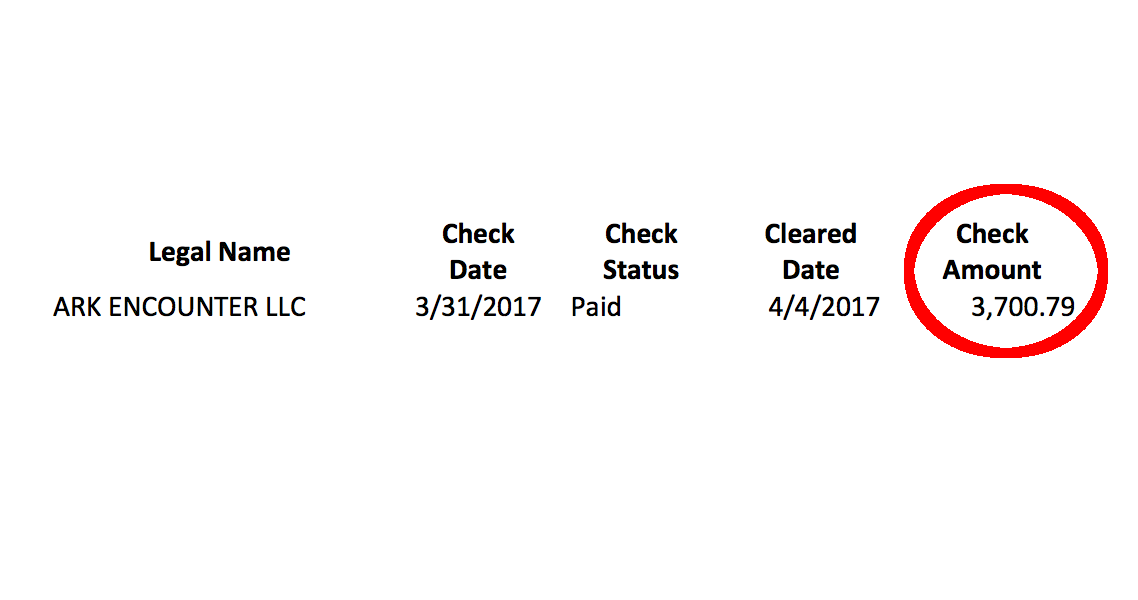 A search was conducted using all entity names you provided, including “wildcard” parameters to return the broadest information available, and the complete list of search results is attached hereto.

Our Department does not have any other records regarding rebates or payments made to the listed entities. Additional information may be available in other agencies.

We know the Ark has been empty during what you’d expect are peak hours.

We know a Grant County official has told reporters the economic boom local businesses were expecting as a result of Ark Encounter hasn’t happened yet.

We know the Ark’s parking lot is often far from full.

We know Answers in Genesis lowered its attendance estimates for the first year just a couple of months after it opened.

We also know the not-quite-a-rainbow colors illuminating the Ark at night haven’t made it the premier family destination Ken Ham likes to think it is.

But you could rationalize away all of those things. The Creationist version of Kellyanne Conway could easily spin those facts into positives.

I had no idea, though, that the state of Kentucky was giving Ark Encounter such a paltry check. I’m somewhat thrilled… but I’m also deeply suspicious.

I reached out to Ark Encounter to ask for any explanation and will update this post if/when I hear back from them.

April 6, 2017
Can a New Group for "Republican Atheists" Gain Any Traction?
Next Post 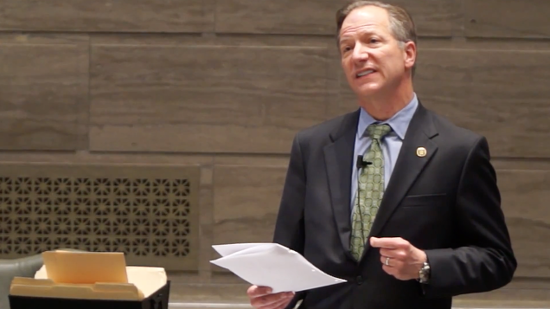