This Couple Has Every Right To Give Their Kids the Last Name “Allah” (Even If It’s a Horrible Idea) March 27, 2017 Hemant Mehta

Should a Georgia couple be allowed to name their child ZalyKha Graceful Lorraina Allah?

That’s the question at the center of a new lawsuit filed by the ACLU. They’re defending the parents, Elizabeth Handy and Bilal Walk, who chose the name. On the other side are two Georgia officials who rejected the request, saying it goes against state law requiring newborns to have the last name of at least one of the parents (or a combined version of the two) unless there’s some cultural reason for doing otherwise. 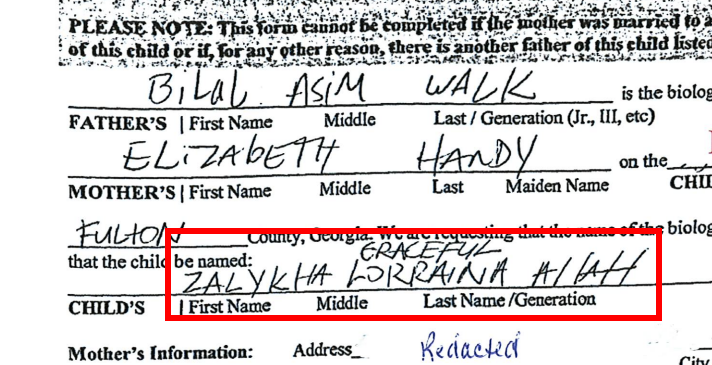 Before you jump to your own conclusion on the matter — and before you judge the parents — keep these three things in mind:

1) ZalyKha is about to turn two and still doesn’t have an officially recognized name. That means she doesn’t have a birth certificate, which means she doesn’t have a social security number, which prevents her from being covered under Medicaid and getting food stamps. If this continues, she won’t be able to enroll in public school, either. It’s absurd that this hasn’t been resolved, and that’s not necessarily the parents’ fault.

2) The couple has an older son whose name is Masterful Mosirah Aly Allah. His name went through the system without a problem. What’s up with that?

3) The couple is due to have another baby in three months and they don’t want to deal with this problem again.

The ACLU’s argument here is that parents have every right to name their kids whatever they want — in any part of the name — no matter how stupid you think it is. The current state law requiring that parents follow a certain naming convention, the ACLU argues, violates their civil rights.

Furthermore, it’s not like the name violates the other state rules. It’s not obscene. There are no numbers or symbols. And even though no Muslims name their kids Allah — usually choosing Muhammad if they want to go the religious route — that’s besides the point. In fact, the father told a local reporter that religion had nothing to do with this.

ZalyKha was born May 25, 2015. They said they gave her the name because it was “noble,” and it has nothing to do with religion. Allah is the name for God, the Supreme Being, in the Arabic language.

“Simply put, we have a personal understanding that we exercise in regards to the names,” Walk said. “It is nothing that we want to go into detail about, because it is not important. What is important is the language of the statute and our rights as parents.”

There are all sorts of reasons to judge this couple for what they’re doing with the names. They’re putting their children in harm’s way by potentially offending Islamic extremists and good luck if those kids ever try to get on an airplane. But making a case for why they’re bad parents is irrelevant. That’s not the issue here.

Indeed, some legal scholars believe the parents have a strong case here and that the current Georgia law is unconstitutional, violating both the First and Fourteenth Amendments (free speech and due process).

The sad thing is that the ACLU may win, but the baby’s still in for one hell of a rough life. Sometimes you can root for justice and be disappointed by victory.

March 27, 2017
Colorado Mosque Vandalized By Criminal Who Also Threw a Bible Into the Prayer Room
Next Post