For several years now, the Birdville Independent School District in Texas has been a place where Christianity is routinely promoted and those who challenge Christian supremacy are punished. That battle recently came to a head at a U.S. Court of Appeals, but before we get to those details, it’s important to remember how we got to that point.

It started in 2013, when Isaiah Smith began exposing all sorts of religious violations at Birdville High School.

For example, after getting bullied for being gay, Isaiah brought a Bible to school to show his classmates why the verses they cited didn’t actually condemn gay people (an argument put forth by author Matthew Vines). In the process, Smith ripped out the pages from Leviticus.

That caused Assistant Principal Glenn Serviente to pull Isaiah from class and warn him that he must not cause a “disruption” by ripping the Bible. (I guess the bullies were not seen as disruptive…?) Isaiah promised not to rip it up any more, but asked for and received permission to continue carrying that Bible with him.

A couple of days later, Serviente summoned Isaiah back to his office:

He asked Isaiah, “how would Muslims feel if a student was tearing up the Qur-an?” and then told him he was suspended. He then demanded Isaiah to give him the book. Isaiah said no, informing Serviente that he did not tear the Bible since being told on Monday that he could not do so. The assistant principal clarified that Isaiah was suspended for merely carrying a ripped Bible at school. He then reached for Isaiah’s Bible without his permission and slammed it on his desk. First he said Isaiah was suspended from school for the remainder of the day, but then changed his mind and told Isaiah he was suspended for three days. He also confiscated Isaiah’s Bible.

At that point, the American Humanist Association stepped in and sent the district a letter letting them know they were violating the law by suspending Isaiah when, in fact, he did nothing wrong:

Reprimanding Isaiah for ripping his Bible on Monday violated the First Amendment. Isaiah’s Bible was not the source of disruption, the bullying was. Instead of reprimanding the bullies, the school punished Isaiah for offering an alternative viewpoint on the Bible.

It took a month, but the district eventually cleared Isaiah’s record of any disciplinary problems. (They gave him his Bible back, too.)

But that wasn’t all.

According to another letter the AHA sent to the district in May of 2014, the church/state separation violations just kept piling up.

Principal Jason Wells also spoke at the ceremony, as did other administrators, and they liberally quoted Bible verses and threw in mentions of “God” and “Jesus.”

All of those things are illegal.

The school sponsored and promoted religious assemblies during school hours.

A proselytizing pastor was invited to speak at the school and the district even sponsored overnight retreats at a local church.

Teachers had overtly Christian symbols in their classrooms.

It’s one thing for teachers to wear cross necklaces or have Bibles in their desks. It’s another when they place visible crosses all over their rooms:

These were all things Isaiah helped uncover.

And, once again, District officials capitulated when faced with clear evidence of their wrongdoing:

After the Appignani Humanist Legal Center sent a letter in May to the school district reporting these violations, school officials responded promptly by collaborating with the AHLC to correct these violations while ensuring that students’ and teachers’ First Amendment rights are maintained.

“We are very pleased that the school has been willing to cooperate with us to correct these violations,” said Monica Miller, an attorney with the Appignani Humanist Legal Center. “These reasonable accommodations strike the appropriate balance between free speech rights and the Establishment Clause.”

The school and the legal center agreed that principals and other school administrators cannot participate in the Baccalaureate ceremonies, though they can still attend as spectators. The school has also agreed that it will no longer hold its retreats in a church but will instead use a local community center. The school will also remove the cross displays in classrooms, though teachers may retain small, personal religious items in or near their desk space so long as the items are not obvious to students. To ensure it maintains its neutrality on religious matters, the school drafted a series of guidelines on handling First Amendment Speech and Religion issues that will be part of the annual faculty training.

You would think after all of that, the District would have learned its lesson.

That wasn’t the case at all. In fact, school board meetings still included religious invocations delivered by students.

Since being polite hadn’t worked, the AHA eventually filed a lawsuit last July with Isaiah Smith named as one of the plaintiffs.

Since 1997, the school board has been opening meetings with prayers given primarily by elementary and middle school students. The vast majority of these opening invocations are Christian prayers. Other students are present and subjected to the prayers at these meetings. Smith, an alumnus, attended school board meetings and felt ostracized by the practice because the prayers promoted religion over nonreligion.

“Every appellate court case involving school board prayers has ruled against the practice, and we ask the district court to uphold this precedent in our lawsuit against the Birdville Independent School District,” said Monica Miller, senior counsel for the Appignani Humanist Legal Center. “Subjecting impressionable young students to prayers at school events is unconstitutionally coercive under Supreme Court caselaw.”

“Public school boards should be neutral on religion,” said Roy Speckhardt, executive director of the American Humanist Association. “By opening meetings with prayers, the Birdville school board is sending the message that they favor Christianity over other religions, and that non-Christian community members are unwelcome.”

To be clear, the AHA had written a letter regarding the prayers in 2014, but the District’s attorney told them there was no plan to stop saying them. The lawsuit was the next step. It’s also worth noting that every one of the school board members mentioned their religious affiliation in their official profiles. (They’re all Christian, in case you had any doubts.)

The lawsuit was also important for another reason: Because of the repeated constitutional violations, even after being told they were breaking the law, the suit called for each individual board member to pay a penalty, not just the District itself.

Unfortunately, this past August, United States District Judge John McBryde ruled in favor of the District, saying that the student prayers were allowed under the law. Legislative prayers were legal in certain circumstances, he said, citing Marsh v. Chambers and Greece v. Galloway. He argued that the school board prayers fell under that umbrella.

Not true, said the AHA in an appeal. The crux of their argument was that the Supreme Court has always distinguished between adult invocations — like the kind you hear at city council meetings — and ones you might hear at a school board meeting because the latter involved children.

Last month, the AHA presented their case in front of the Fifth Circuit Court of Appeals.

“The Supreme Court has made clear that prayers at public school events violate the Establishment Clause,” said Monica Miller, senior counsel at the Appignani Humanist Legal Center, who gave the oral arguments. “Prayers at school board meetings are even more problematic than prayers at football games and graduation ceremonies, as the setting is more formal, the power imbalance between school officials and the students is even more pronounced, and the school board’s active participation in the prayers makes them even more unequivocally school-endorsed.”

Miller continued, “The Supreme Court in Town of Greece v. Galloway upheld the narrow exception for legislative prayer but emphasized that the exception is inapplicable to prayer in public schools because students are far more susceptible to religious coercion.”

You can hear audio of the oral arguments right here.

This is a District that has shown its preference for Christianity for years. The school board prayers were just the most recent manifestation of the administrators’ desire to promote their faith through the government.

Unfortunately, the panel of judges ruled yesterday in favor of the District.

“It would be nonsensical to permit legislative prayers but bar the legislative officers for whom they are being primarily recited from participating in the prayers in any way,” Judge Jerry E. Smith wrote for the panel. “Indeed, the Supreme Court did not take issue with the fact that Town of Greece board members bowed their heads during invocations.”

The opinion noted that the Birdville school board meetings are held in an administration building — not in a school. People attending can enter and leave at any time, including during the prayer. It said the board meetings open with a student-led Pledge of Allegiance and a statement that can include a prayer, although the statements are sometimes secular.

It also noted that no student representatives sit on the board, as in some school districts.

“Although it is possible to imagine a school-board student-expression practice that offends the Establishment Clause, this one, under its specific facts, does not,” Smith wrote.

The ruling also noted that the intended audience for the prayers were the board members themselves — adults, that is — so it was irrelevant whether or not children attended the meetings.

(All three judges were nominated by Republican presidents, in case you were wondering.)

As of this writing, the AHA hasn’t issued a formal response, though Miller, their attorney, told Reuters that they were considering their options. They could ask the entire Appeals Court to review the case, though that doesn’t mean the judges will say yes to the request. The District, on the other hand, called the decision “complete vindication.”

If this decision stands, though, it’s going to be a problem. Because there are so few cases at this level involving school board prayers — and the others were decided before Greece v. Galloway, which said sectarian prayers at government meetings were legal — you can bet your ass Christian-majority school boards across the country will cite this new case as justification to include religious invocations at their own meetings. Even though this decision applies specifically to this District.

My fear is that this practice will now spread, and school board meetings will become yet another extension of local churches. 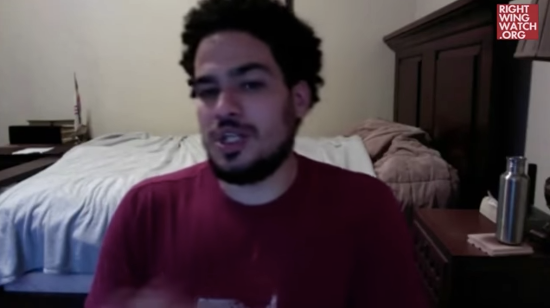 March 21, 2017 E.W. Jackson: If After School Satan Clubs Exist, Public Schools Must Promote Christianity
Browse Our Archives
What Are Your Thoughts?leave a comment