Pat Robertson says a lot of stupid things. And his viewers often ask him really stupid questions. But if you’re lucky, both of those things happen in the same segment like they did yesterday.

The viewer didn’t understand why so many people “hate President Trump.” What’s so wrong with making America Great Again?!

That was cringe-worthy enough… until Robertson responded. 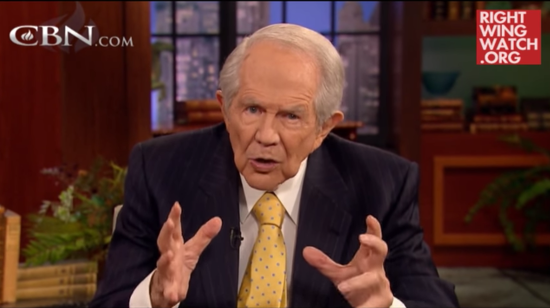 There’s a desire on the part of some, and I think it’s satanic, it really is spiritual, to destroy America. America is the great hope of the world. If America goes down, the lamp of freedom goes out. There’s no other champion of freedom anywhere in the world and we would be engulfed in chaos.

We were heading that way. Obama was bringing it on. Another four or eight years of Obama-style government and we would have been consumed with a socialist mentality and the freedom that we’ve enjoyed would be blotted out so God gave us a reprieve and this thing is spiritual. It really is spiritual. We need this land, it’s so important. I counsel you: Pray for this nation, pray for the president, pray for this nation, what’s being done against him surpasses — it’s not human, it’s a spiritual thing.

It’s because Satan told us to fight back.

Robertson has it all wrong. If Satan really wanted to do some damage, he’d tell us to shut the hell up and let Trump move forward without any resistance whatsoever. By that logic, Satan’s a goddamn patriot.

March 1, 2017
New Ohio Bill Would Make It Legal for Atheists to Solemnize Wedding Ceremonies
Next Post