A lawsuit involving the ironically named Constitution Park in Shelton, Connecticut has finally been settled, with the city paying the Freedom From Religion Foundation nearly $1000 in legal fees.

To understand it, you have to go back to 2012, when the American Legion (a faith-based veterans group) requested to put up a display in the park depicting “heralding angels” from the Nativity story. There was no formal display policy for the park, other than the Mayor had to sign off on what went up. But we all know how this works: When you open the door to religious displays on government property, non-religious displays must be allowed there as well.

That’s why atheist Jerome Bloom asked permission in 2015 to put up a “Let Reason Prevail” banner like the one below, which says there are no angels. 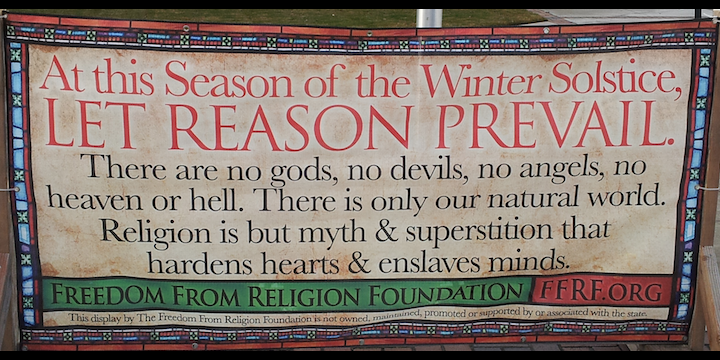 At this season of the Winter Solstice, LET REASON PREVAIL. There are no gods, no devils, no angels, no heaven or hell. There is only our natural world. Religion is but myth & superstition that hardens hearts & enslaves minds.

That banner was quickly rejected because, as Bloom was later told by the director of the city’s Parks and Recreation Department Ronald Herrick, it was considered “offensive to many.” But that’s not a legal reason to exclude it.

The Freedom From Religion Foundation soon stepped in on Bloom’s behalf by writing a letter urging officials to reconsider. When no one from the city responded, FFRF wrote again. And again. Even when officials responded, it was without substance.

FFRF and Bloom eventually sued the city of Shelton, Mayor Mark Lauretti, and Herrick. FFRF wrote at the time:

FFRF terms the city of Shelton’s censorship “impermissible viewpoint-based discrimination.” The city’s actions have caused Bloom and FFRF injury by censoring and excluding their protected expression, and by disparaging Bloom on the basis of his nonbelief in religion, rendering him a political outsider, FFRF’s legal complaint notes…

The plaintiffs are seeking a judgment that the city’s censorship has violated their free speech rights under the First and 14th Amendments, as well as their equal protection rights, and a judgment enjoining the city from excluding their display in the future, as well as nominal damages and reasonable legal costs.

Here’s where it gets a little strange.

While that lawsuit was pending in the courts, Bloom said he would drop the case and work out a settlement with the city.

Because local officials gave him permission to put a banner with the same message in nearby Huntington Park:

But Mayor Lauretti couldn’t handle the atheist message over there, either, which is why he felt compelled to put up his own sign wishing everyone a Merry Christmas and Happy Holidays:

“Well, I would think that the majority of the people in this community are highly supportive of one sign,” said a smirking Lauretti.

Lauretti added, “People should just take a deep breath and deal with it.”

To be clear, Bloom, the atheist, had to file a lawsuit to put his own message in Constitution Park — and still never received a green light. The compromise was that he could erect his message near a Nativity scene in a different park.

And when he did that? The mayor still decided to one up him with a separate message. Just to make sure the atheist didn’t get the last word.

It’s not that what Lauretti did was illegal. It was just a petty, spiteful move. Making matters worse, the atheist display was soon vandalized.

The situation is now resolved, though.

“We are pleased the city of Shelton will no longer discriminate against atheists and other nonbelievers in its public forums, and that it has closed the forum at Constitution Park,” says FFRF Co-President Dan Barker. Barker indicated that FFRF and Bloom will continue to erect a winter solstice display in Huntington Green as long as religious displays are put up, and added: “We question that it’s truly a public forum if dissenting points of view are vandalized. We’ll be back in December, but will be asking for additional protection of our display.”

All of this could have been avoided if only Mayor Lauretti respected the law he’s sworn to uphold. Taxpayers should remember that the next time he’s up for re-election. 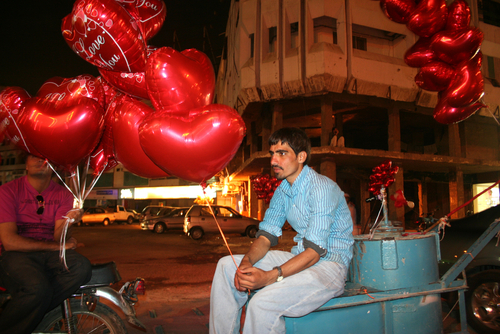