If you’re thinking, “That’s already protected,” you’d be right. But Christianity is powerless if believers aren’t constantly lying about being persecuted, so the identical House/Senate bills are moving forward, anyway.

Yesterday, the show Good Day Orlando had a mini-debate on the bills featuring Troy Schmidt (a local pastor) and David Williamson (of the Central Florida Freethought Community): 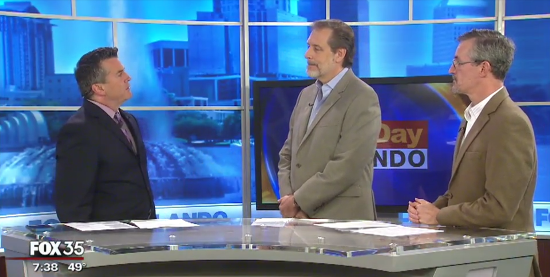 It won’t surprise you to hear me say that Schmidt’s points were absurd. He said the bills were necessary because atheist groups (like the Freedom From Religion Foundation) were warning teachers against promoting Christianity in the classroom… even though FFRF is absolutely right and the issue has nothing to do with the current bills.

Williamson wisely defended the rights of students to pray (or not) as they please while sending a message that his position respects the rights of everybody, unlike Schmidt’s side, which privileges Christianity.

At one point, Schmidt said “we’ve taken religion out” of schools, adding that we’re now sending a message that “religion is bad.” Because he’s wrong on both counts, Williamson pushed back, only to have Schmidt say that’s what he’s “hearing.”

He needs to get his ears checked.

Neutrality, despite what conservatives want you to believe, is not an anti-Christian position.

Kudos to the host for doing an good job moderating and asking interesting questions.

February 11, 2017
A Conservative Group's "Education Reform Report," Made for Donald Trump, Would Put God in Schools
Next Post

February 12, 2017 Unintentionally Ironic Church Sign Encourages People To Avoid "False 'Facts' and Outright Lies"
Browse Our Archives
What Are Your Thoughts?leave a comment