Televangelist Lori Bakker: Most Participants in the Women’s March Were “Molested” or “Abused” February 8, 2017 Hemant Mehta

Televangelist Lori Bakker: Most Participants in the Women’s March Were “Molested” or “Abused”

Televangelist Jim Bakker and wife/co-host Lori Bakker believer there’s something wrong with everyone who participated in the Women’s March on Washington the day after Donald Trump‘s inauguration.

It’s not just a disagreement over beliefs. They think there’s something much more sinister at play. 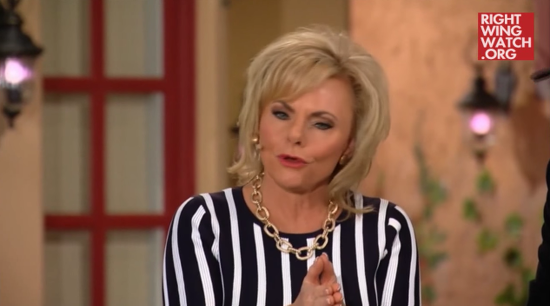 Bakker’s wife and co-host, Lori Bakker, suspected that the women who marched against President Trump were survivors of childhood abuse: “Most women like that have been molested, they’ve been abused, they’ve been whatever in their life. You just have to go back to, typically, early childhood and things like that. And they just need the healing of the lord.”

No citations were provided. As usual.

Needless to say, the march included plenty of devout Christians, plenty of men, and plenty of women disgusted by the misogyny already shown by this administration and the Republican Party as a whole. They’re not doing this because there’s something “wrong” with them.

The opposition to stupidity and blissful ignorance is coming from everywhere, not just people who are “broken.”

And the protests aren’t going to stop while Trump and his defenders continue to insist there’s something unpatriotic or problematic with his critics.

February 8, 2017
Judges Will Soon Decide if Christian Prayers Are Legal at a TX District's School Board Meetings
Next Post

February 8, 2017 Right-Wing Pastor: Donald Trump is God's Way of Saving Us from the Rise of the Antichrist
Browse Our Archives
What Are Your Thoughts?leave a comment