Who Thought “Jesus, Please Heal My Dog” Would Be a Good Book to Read to Elementary School Students? February 7, 2017 Hemant Mehta

Who Thought “Jesus, Please Heal My Dog” Would Be a Good Book to Read to Elementary School Students?

For some reason, the administrators at Grassy Pond Elementary School in Gaffney, South Carolina thought it’d be a wonderful idea to read a book to students that taught them valuable lessons… along with Christian mythology.

It’s not even subtle. According to the Freedom From Religion Foundation, which wrote a letter to the District last week, the book is called Jesus, Please Heal My Dog. (You’ll never guess what it’s about.) Even worse? The book claims to be “based on a true story.” 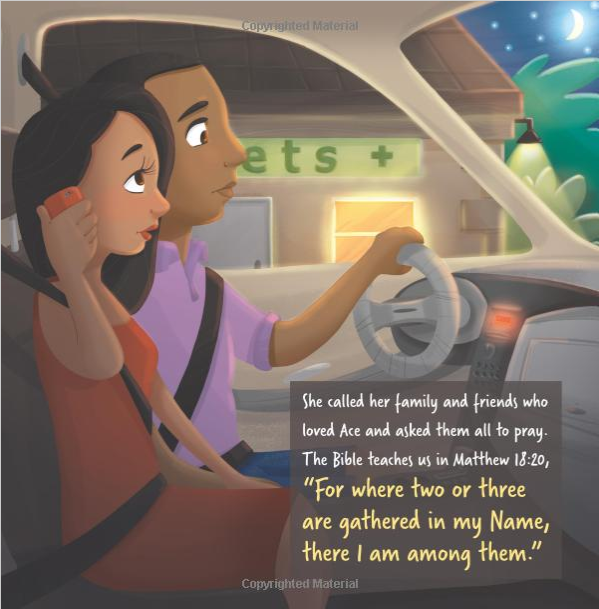 FFRF’s letter made clear this would be a constitutional violation:

“It is well settled that public schools may not advance or promote religion,” FFRF Staff Attorney Patrick Elliott wrote to Cherokee County School District Superintendent Quincie Moore. “Public schools may not promote prayer, bible verses, and religious stories as part of instruction during the school day.”

FFRF emphasized that it is especially inappropriate for an elementary school to promote Christian instruction, given the young age of students involved. There is no doubt that many parents of students have different religious and nonreligious beliefs. This story alienates those non-Christian and nonreligious students, families, teachers, and members of the public whose beliefs are inconsistent with the message being promoted by the school.

And even were the presentation voluntary, FFRF added, this would not exempt the school from abiding by constitutional requirements.

“How could any school official permit this egregious misuse of authority to proselytize a captive audience of young, impressionable students?” asks FFRF Co-President Annie Laurie Gaylor.

It’s not clear who made this decision, what the hell that person was thinking, or whether they chose a different book after receiving the letter. But if they do it again, the consequences could be much more serious than a warning letter.

February 7, 2017
MN Town Foolishly Votes To Re-Erect Christian War Memorial, So Atheists Will Ask For One, Too
Next Post

February 7, 2017 This Cringeworthy Super Bowl Sunday Church Service Will Make You Never Want to Find God
Browse Our Archives
What Are Your Thoughts?leave a comment