Religious Right leader Bryan Fischer says that Jesus would approve of Donald Trump‘s Muslim ban because even He takes part in “extreme vetting” when it comes to deciding who gets into Heaven. 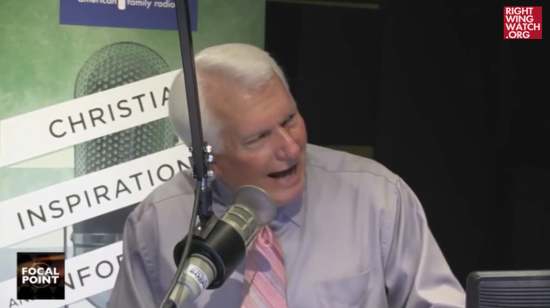 “Don’t we hear stuff about the pearly gate, which is some kind of entrance?” [producer Jeff] Reed asked. “The new Jerusalem, I think in Revelation 21, where he talks about a high wall, a great wall was built with twelve gates. And even Lazarus and the rich man, He fixed a chasm in between. I don’t want this to sound sacrilegious, but isn’t Jesus or God the Father doing some extreme vetting on who He’s allowing to spend eternity with Him and who is not?”

“That’s actually a powerful analogy,” Fischer responded. “You talk about the ultimate form of immigration is from earth into the kingdom in the age to come. That’s the ultimate form of immigration. You migrate from here to there and you have got to have a valid entry pass or you’re not going to be let in. You can’t just go in there because you want to, you’ve got to have a permit, you’ve got to be vetted and you have got to have the right certifications to be able to go through the pearly gates otherwise the gates are shut and you are on the outside … So yeah, would Jesus be in favor of restricting immigration? Absolutely.”

Let’s set aside the irony that Jesus, if He lived today, would be a dark-skinned, Middle Eastern refugee himself and talk about why Heaven’s vetting process is awful.

Anyone can get in. The Pearly Gates are so porous that rapists, thieves, abusers, and everyone else who made life for others a living hell can easily get into Heaven as long as they repent on their deathbeds and “accept Jesus” into their hearts. I’m sure their victims are thrilled to run into them in the afterlife. What sort of “vetting” is St. Peter doing up there to allow that to happen?

Meanwhile, decent human beings who dared to ask for evidence of God’s existence — or who made the mistake of being born into a non-Christian family or country — are eternally tortured for their “mistake” even though they’re the type of people you would want in your community.

It should be noted that there are several Christian leaders who condemn Trump’s ban as inhumane and un-Christian. They also condemn the special privilege that Trump has bestowed upon Christian refugees from Muslim-majority nations.

But Fischer has Jesus on his side, so there. (You know what you’ll never hear Fischer say? “I oppose this idea, but Jesus would be in favor of it.” Whatever Fischer believes, Jesus magically agrees with.)