Tony Perkins: The Johnson Amendment Must Be Repealed Because “the Church Predates Government” February 5, 2017 Hemant Mehta

Tony Perkins: The Johnson Amendment Must Be Repealed Because “the Church Predates Government”

It’s a horrible idea — both for society and religious groups — so no wonder Perkins defended it. 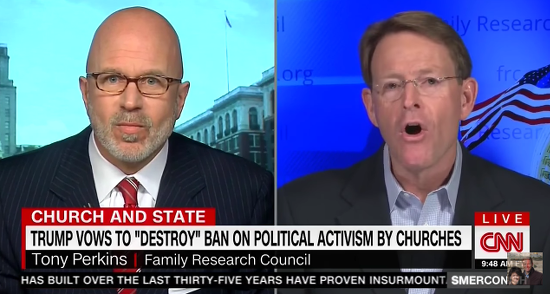 Perkins lied right off the bat, claiming that the repeal would allow church leaders to speak out on “political issues that [are] spiritual at their core” — even though that’s already allowed. Pastors routinely speak out against abortion rights, civil rights for LGBT people, science, etc. The Johnson Amendment has no problem with any of that. What pastors can’t do right now is say, “Good Christians will vote for Republican Candidate X.”

That’s what Perkins wants to be able to do.

He also lied about how pastors in Texas had their sermons subpoenaed in order to restrict their speech — the truth was that the sermons were subpoenaed as part of a routine legal discovery process (though there were arguments over whether it was necessary).

Perkins then came up with an odd way to defend what he considers an act of free speech.

… These issues predate government. The church predates government. And longstanding tradition in this country has been, until the 1950s when the Johnson Amendment was added, was pastors and churches can speak freely. I mean, this goes back to the apostle Paul, or apostles Peter and John, who said, “Look, you’re not gonna regulate what we say. We’re accountable to God, not to some government bureaucrat”… I believe in the freedom of the pulpit to speak what it declares biblical.

Just because religion is older than government doesn’t mean the church gets to do whatever it wants on the taxpayers’ dime. As a YouTube commenter points out, prostitution is way older than the government, and we regulate the hell out of that.

If the church is currently muzzled from speaking out on social issues, it’s news to me… and everyone else who’s spent a good portion of the past decade documenting all the horrible things religious leaders say on Sunday mornings.

No pastor has ever said, “I would love to tell you why two men shouldn’t be allowed to get married, but the government won’t let me.” The problem with religion isn’t that church leaders don’t get to say what they want — it’s that the things they do say are so often disturbing.

If church leaders want to play politics, they already can. They just have to start paying taxes like the rest of us.

February 5, 2017
Bill Maher and Sam Harris Discuss Islam (Without Ben Affleck Around to Call Them “Racist”)
Next Post