A New Bill Would Prevent Banning Immigrants from Entering America Due to Their Faith (or Atheism) February 3, 2017 Hemant Mehta

After a week of Donald Trump‘s Muslim ban, a new bill sponsored by Rep. Don Beyer (D-VA), with a lot of Democratic support, would amend the Immigration and Nationality Act to make sure no immigrants (or refugees or international visitors) are prevented from entering the United States because of their religious beliefs. And it wouldn’t just apply to people of faith.

The amendment specifically includes a reference to atheists (who have obvious reasons for wanting to leave Islamic theocracies). 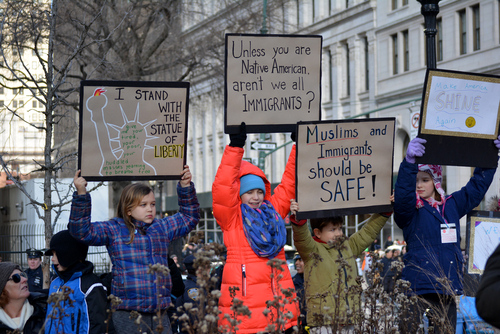 Notwithstanding any other provision of the immigration laws, an alien may not be denied entry, reentry, or admission to the United States, or any other immigration benefit, because of the alien’s religion or lack of religious beliefs.

The American Humanist Association was one of several groups pushing for this amendment to include atheists:

“The inclusive language in this bill recognizes the rights of humanists, atheists and other nonreligious immigrants to equal treatment by the government,” said Roy Speckhardt, executive director of the American Humanist Association. “Individuals should not be barred from the country just because they don’t happen to identify with a particular religion.”

Matthew Bulger, legislative director of the American Humanist Association, said, “This bill represents a significant step for the humanist and nontheist movement. Congress is expanding its understanding of religious freedom to include those who do not identify with any religion.”

The bill already has more than 60 co-sponsors as well as the support of Gold Star father Khizr Khan and the ACLU.

Khizr Khan said, “The only way to deal with this clown show that is taking place in the White House, which violates the basic decency of America, is through challenges from Congress. The malice of Donald Trump is evident: he told Rudy Giuliani to devise an illegal, unethical, un-American scheme that will fulfill his un-American, unpatriotic campaign promise. This way of governing is alienating Muslims in the United States and around the world.”

Whether the Republican majority in the House will have the heart to support the bill remains to be seen. Still, it’s a powerful statement in defense of true religious liberty.

February 3, 2017
Televangelist Rick Joyner: People Who Oppose Donald Trump Are Under the Influence of Satan
Next Post

February 3, 2017 Creationist Ken Ham Will Permanently Illuminate Ark Encounter in Rainbow Colors. Because God.
Browse Our Archives
What Are Your Thoughts?leave a comment