The Democrats Can Solve Their “Religion” Problem Without Pandering or Forgetting Their Values February 2, 2017 Hemant Mehta

In the video below, Emma Green of The Atlantic talks about the problem with Democrats who can’t always speak in the language of faith. It’s not that Democrats have to become more religious — the Party is pretty religious already — but they’re not nearly as comfortable as Republicans at talking about how their faith influences their decisions.

A Democrat talking about religion is like Donald Trump talking about black people: It’s always awkward, it’s often misinformed, and you really wish they’d just shut up about it.

Maybe that’s because a lot of elected Democrats are not all that religious to begin with. Maybe they don’t want to alienate the ever-growing part of their base that is non-religious. Maybe they just seem disingenuous when they do it.

But there’s no mistaking the fact that Republicans who speak in the language of religion do a better job at getting white evangelical support even when their values don’t align. Only one party actively works on behalf of the poor, and the minorities, and the people who are routinely disenfranchised, and the environment — you know, the issues we’re always told Jesus cares about — and yet it’s not the party evangelicals typically support. 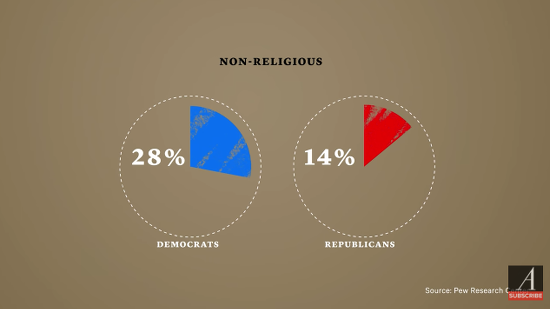 There’s absolutely a case to be made that Democrats shouldn’t use faith as a political tool. Politicians should base their decisions on evidence, not whatever God whispers in their ears, and their speeches should reflect that — but as with so much of politics these days, while Democrats are busy arguing over whether to do the “right” thing, the Republicans are breaking the rules left and right and winning every time.

Democrats can do this without pandering. Green brings up Rev. William Barber in North Carolina, who uses his faith to push for liberal issues. (His speech at the Democratic National Convention this summer was incredible.) A lot of credit goes to him for getting anti-LGBT bigot Pat McCrory out of the Governor’s Mansion this past November, even while so many states were voting for Trump. We could use more people like him, comfortable in talking about his personal faith, but more interested in achieving particular goals than proselytizing.

Green also brings up Bernie Sanders, who isn’t religious in any meaningful sense, but did a remarkable join of rallying Democrats around income inequality, which he always speaks of as a moral issue. That’s just as important.

I would go a step further than Green in one area. While Democrats who are religious ought to talk about how their faith and reason point them in a particular direction, those who are not religious ought to do a better job of talking about how faith doesn’t play a role in their thinking instead of just avoiding the subject. Atheists need something to rally around, too.

The strange thing about Democrats is that they’re not religious enough for white evangelicals, and they’re too religious for the atheists, Agnostics, and “Nones” who make up a growing percentage of their base. All the more reason to stop playing to some middle group that doesn’t exist. Just speak honestly, in whatever words are most comfortable to you, and deliver on our shared values of inclusion, common sense, and reason.