Maybe the biggest lie to come out of Donald Trump‘s election is that Christians were finally going to get some respect… as if they weren’t on top of the food chain already.

Televangelist Jim Bakker certainly celebrated that lie on his show this week, announcing to his audience that Christians were no longer “second-class citizens” under this administration. 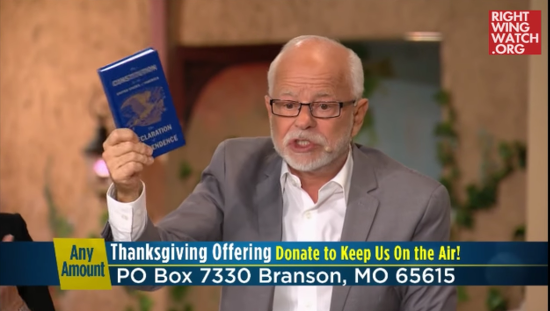 “I feel free! I can talk in my pulpit now,” exclaimed [guest evangelist Billye] Brim, who apparently was not allowed to speak freely before Trump’s victory.

Bakker agreed: “They can’t shut us up! We have a Constitution that belongs to us — this Constitution is for the church! We’re not second-class citizens! They turned us into that!”

If Christians were second class citizens under (Christian) President Obama, then who were the first-class citizens? Because it wasn’t atheists. And it wasn’t Muslims.

If it’s true, though, we’re learning why Christians don’t deserve to be in power. Trump’s been in office for under two weeks and we’ve already seen civil rights go out the window when it comes to Muslims. Other groups that Christians historically criticize are sure to be thrown under the bus in due time.

Brim and Bakker rejoiced in their newfound glory before telling one more lie about how President Obama gave money to terrorists. (The money was actually sent to Pakistan for “humanitarian aid” and to help them “prepare for good governance and the rule of law in a future Palestinian state.”)

But what’s stopping them from spreading lies? They’re first-class citizens now. Maybe if they’re lucky, they’ll even get another Christian President soon.

February 3, 2017 Ken Ham Says Liberals Spread Lies About Him and Donald Trump (Spoiler: We Just Quote Them Verbatim)
Browse Our Archives
What Are Your Thoughts?leave a comment