In South Africa, a Proposed Law to Ban Hate Speech May End Up Putting Christian Preachers in Jail

South African President Jacob Zuma (below) is one of those thin-skinned politicians who can’t handle criticism of his bad ideas, and a new law was drafted that would prevent cartoonists (particularly one named Zapiro) from mocking him. 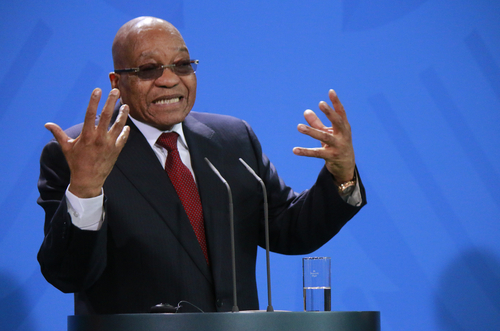 The draft of the new Hate Crimes bill forbids “prejudice, bias or intolerance” on the basis of race, gender, sexual orientation, religion, gender identity, etc. (It’s a long list.) It also calls out those who “stir up violence against or bring into contempt or ridicule” anyone on the basis of their beliefs or occupation — that includes government officials. (Take that, cartoonists!)

Anyone found guilty of such “crimes” could spend 3 years in prison for a first offense and 10 for a second.

But Zuma overshot the mark.

By putting damn near everything on his list of things you can’t criticize, religious leaders who say people of other faiths are doomed to spend an eternity in Hell, or that LGBT people who act on their sexual orientations are violating one of God’s Rules, could effectively be jailed for preaching their beliefs.

You might recall how, just last week, a local celebrity stormed out of a church after the pastor called homosexuality “unnatural.” That could be construed as hate speech under the new law.

And when you have religious fundamentalists arguing for more free speech, you know you’ve gone too far.

According to spokesperson, Apostle Julius Moloi, if passed, these bills could see holy men locked up in jail for 10 years “for speaking the word of God”.

Moloi says people should unite and protect their faiths.

“The Christian Ministers Council of Southern Africa appeals to all religious leaders in South Africa and elsewhere to set aside our vast differences and take action against this demonic process which is about to affect all faiths,” he says.

How’s that for religious unity? Let’s all work together to shut down this new bill so we can go on talking about how everyone else is damned.

It’s telling that religious leaders are the ones trying to take down a bill prosecuting those guilty of hate speech… but the pastors are absolutely right. This sort of censorship is appalling and South Africa would be making a tremendous mistake by passing the legislation.

The freedom of expression shouldn’t be up for debate — especially when actual hate speech (like calling for someone’s assassination) is already forbidden under the law. No government officials ought to be legislating speech they just don’t like.

Tuesday was the last day for public comments on the bill. Now it’s up to government officials to realize their mistake and stop this bill before it’s passed.

(Image via Shutterstock. Thanks to A.D. for the link)

February 2, 2017
The Democrats Can Solve Their "Religion" Problem Without Pandering or Forgetting Their Values
Next Post