Donald Trump just announced that 49-year-old Neil Gorsuch, who sits on the 10th Circuit Court of Appeals and has been dubbed the “most natural successor to Justice Antonin Scalia” in all the wrong ways, will be his nominee for the Supreme Court seat left open by Scalia and hovered over for nearly a year by Merrick Garland. Unless Democrats get their act together and protest the stolen seat, it seems likely that Gorsuch, with his strong academic background and legal renown, will replace Scalia and bring the Court back to its right-leaning tilt. 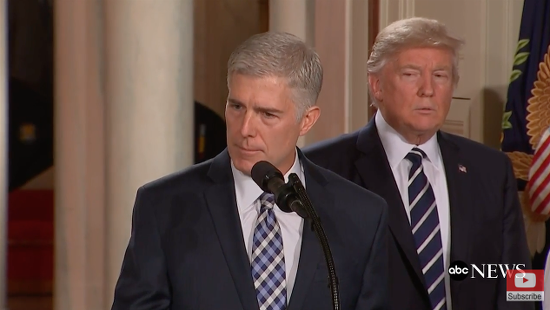 While Gorsuch has a long history that will be pored over in coming weeks, it’s important to understand why he’s such a threat to church/state separation specifically.

Gorsuch was a judge who ruled in favor of Hobby Lobby before the company’s case reached the Supreme Court, agreeing that the Christian owners had every right to impose their beliefs on their employees by denying them comprehensive health insurance that included birth control — even when the owners falsely claimed that birth control was a form of abortion. He argued that Hobby Lobby would prevail with the argument that the Affordable Care Act “substantially burdened their religious exercise.”

He actually went even further than that, writing in a separate opinion that individual business owners had the same right to deny comprehensive health care from their employees.

He made a similar decision in Little Sisters of the Poor Home for the Aged v. Burwell, where he wrote in a dissent that if your religious beliefs come into conflict with facts and the law, your religion should take precedence.

Gorsuch also joined a dissent in Summum v. Pleasant Grove City, a major case involving a Ten Commandments monument. In that case, officials in Pleasant Grove, Utah allowed a privately donated Christian monument to be placed on public property… while refusing a monument from the (non-Christian) Summum church. That led to a lawsuit that went all the way to the Supreme Court, where the justices unanimously ruled in favor of the city (though they did it on free speech grounds, not church/state separation ones). Before the case got there, however, Gorsuch made a similar argument on the 10th Circuit, saying that the city had every right to say no to Summum because accepting all private monuments would basically lead to chaos. It was a victory for Christians.

In the case of American Atheists v. Davenport, Gorsuch said Christian crosses could be erected on public property (to honor fallen officers) with the blessing of the Utah Highway Patrol because they didn’t promote Christianity. Somehow. To quote Americans United for Separation of Church and State, “What’s even more troubling is that Gorsuch’s opinion questioned whether it should even be unconstitutional for governmental bodies to endorse religion.”

What about abortion? It seems clear that Gorsuch would vote to overturn Roe v. Wade if the opportunity ever presented itself — but there are still five votes in favor of protecting a woman’s right to choose. Ditto with LGBT rights. They’re likely safe, by the thinnest of margins.

But if one of those elderly liberal justices passes away, the real fight will begin.

This is why evangelicals voted for Trump despite all of the awful things he had said and done. This is why his bragging about sexual assault, his obvious pandering to Christians, his three marriages, and everything else that supposedly goes against evangelical talking points didn’t matter to them. They wanted a Supreme Court nominee they could support, and Trump gave it to them.

Refugees will die because of Trump’s ignorance and anger, but evangelicals get a Supreme Court pick.

And remember: Just because Trump didn’t pick Judge William Pryor, an even worse choice, doesn’t mean he won’t select him in the future.

Church/state separation groups are already calling this an awful choice. Yes, it’s to be expected, but that doesn’t mean they don’t have a point.

The Center For Inquiry mentioned his previous decisions as a sign of things to come:

“A Justice of the Supreme Court must be willing to contradict the wishes of the President that appointed them,” said Nicholas Little, Vice President and General Counsel for CFI. “And we have grave doubts that Judge Gorsuch is someone who will weigh his duty to the Constitution over ideological loyalty to an administration that has already proven its hostility to secular government and tolerance of dissent.”

“Judge Gorsuch’s prior rulings, along with his expressed philosophy, indicate a dangerous antipathy towards the protections of the First Amendment for nonreligious Americans and those of minority religious faiths,” said Little. “The religiously unaffiliated are the largest ‘faith’ group in the United States, and our society is only becoming more religiously pluralistic with each passing year. So it is essential that the Supreme Court defend Jefferson’s Wall of Separation between church and state. The history of Judge Gorsuch’s decisions shows a disturbing preference for religion over nonreligion, and for Christianity in particular over other beliefs. It is an attitude that is contrary to Supreme Court precedent and fundamental American values.”

“President Trump has chosen to staff his administration with individuals who are openly antagonistic to America’s secular principles, and he has issued draconian executive orders targeting abortion rights overseas, barring Muslims from entry into the country, and prioritized Christians over non-Christians,” observed Robyn Blumner, President and CEO of CFI. “Now more than ever we need a Supreme Court that will courageously uphold our foundational rights, not return us to a time of greater Christian privilege. There is little evidence that Judge Gorsuch is up to this crucial task.”

The Freedom From Religion Foundation was more blunt:

“In short, Gorsuch is no friend to the separation of state and church,” says FFRF Co-President Annie Laurie Gaylor. FFRF has about a dozen ongoing Establishment Clause lawsuits, several of which may be Supreme Court-bound.

The Secular Coalition for America was equally disturbed:

The nomination of Judge Gorsuch by President Trump signals a clear intent by the Administration to shape the nation’s highest court in an ideological fashion that threatens religious liberty and pushes an agenda at odds with the majority of Americans.

It is imperative that the Supreme Court safeguard the secular character of our government by ensuring that religious freedom is used to protect, not impose, belief on others. Given his past decisions, we are greatly concerned that Justice Gorsuch is not up to this task.

American Atheists has grave concerns about the nomination of Judge Neil Gorsuch to serve a lifetime appointment on the United States Supreme Court. Judge Gorsuch’s expansionist view of religion as a ‘Get Out of the Law, Free’ card is fundamentally at odds with the history of American jurisprudence and would allow religion to be used as a weapon against women, LGBT people, atheists, and others.

I strongly urge members of the United States Senate to fulfill their Constitutional obligation to look deeply at Judge Gorsuch’s record and determine whether or not his views about religious liberty are in line our American values.

Having examined his record myself, it is clear to me that Americans deserve better than a judge who would prioritize the ‘religious beliefs’ of a corporation over the right of a woman to make healthcare decisions for herself and the bigotry of some over the fundamental human rights of vulnerable communities.

Not that this matters as much, but Gorsuch is a Protestant (Episcopalian). While he’s the only one on the Court, he’ll join the five Roman Catholics already on there as another believer in Christ. There are also three Jewish justices. Not a single open atheists on that bench.