Here’s a thought. If you prefer a quiet life where you can run your new church and not have people constantly bring up the decade-old scandal that drove you out of the public spotlight, then don’t make comments like this on Facebook.

At least don’t do it with the setting on “Public” so everyone can see it. 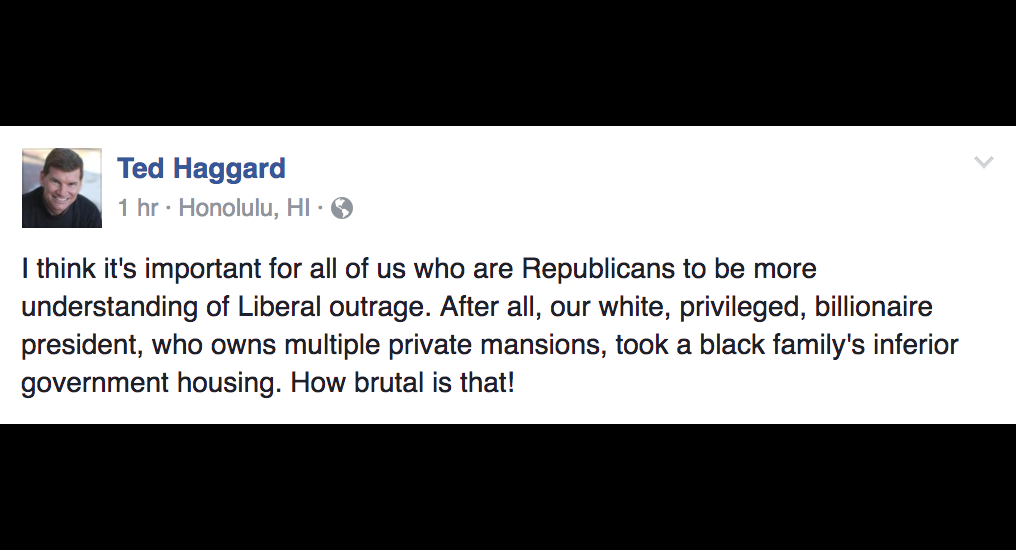 I think it’s important for all of us who are Republicans to be more understanding of Liberal outrage. After all, our white, privileged, billionaire president, who owns multiple private mansions, took a black family’s inferior government housing. How brutal is that!

Hahahahahaha. It’s funny because immigrants’ families are being torn apart because Donald Trump never thinks about the consequences of his actions. You’re hilarious, Jesus followers!

Given that Trump’s Supreme Court nominee, to be unveiled later tonight, is likely going to be an anti-gay zealot, you’d think a pastor who lost his power after being caught with a male escort would be a bit more careful about mocking liberal outrage. Maybe show some empathy for those who are already suffering — and going to suffer — under this careless, cruel administration.

His “joke” today came days after a similar comment thanking the Women’s March for South Carolina Governor Nikki Haley being appointed Ambassador to the United Nations.

(Thanks to Kaleena for the link)

January 31, 2017
Catholic Priest: Critics of Donald Trump Should Kill Themselves By Jumping Off of a Building
Next Post