In 2010, Robert Arnold (below) was elected Sheriff of Murfreesboro, Tennessee. And one of the ways he chose to lower crime rates, influence prisoners, and (let’s admit) get re-elected was to post a copy of the Ten Commandments in the lobby of the Rutherford County Jail. At the time, he justified it by pointing to the phrase “In God We Trust” on the currency, adding that “These were the founding principles of this country.” 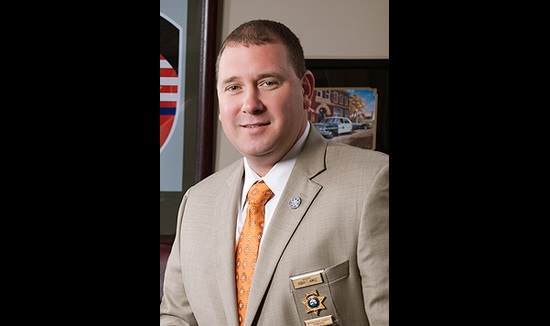 Take a wild guess where this is going…

The man who wanted to promote Christianity so badly recently pleaded guilty to “wire fraud, honest services fraud and extortion” after being caught “illegally profiting from inmates through a company selling electronic cigarettes.”

… the court found probable cause he committed domestic assault, witness tampering and intimidation of his wife pertaining to a Labor Day altercation at the couple’s Murfreesboro home.

As reader Rob points out, “Too bad the Ten Commandments don’t say anything about fraud and extortion… or assaulting your wife.”

Arnold could end up spending 4-6 years in jail by the same all is said and done. Plenty of time for him to read the Bible that he clearly never picked up before.

January 30, 2017
Florida Pastor Flees Naked From Home of Mistress After Her Husband Comes After Him with Gun
Next Post

January 30, 2017 Christian Pseudo-Historian David Barton: White Male Christians Have Fewer Rights Than Everyone Else
Browse Our Archives
What Are Your Thoughts?leave a comment