A Tennessee knitting store owner is refusing to do business with anyone who comes to her shop for “pussyhat” pink yarn — or other supplies to be used in support of the “vulgarity, vile and evilness” of the feminist movement. Because cat ear hats deeply offend her Christian sensibilities. 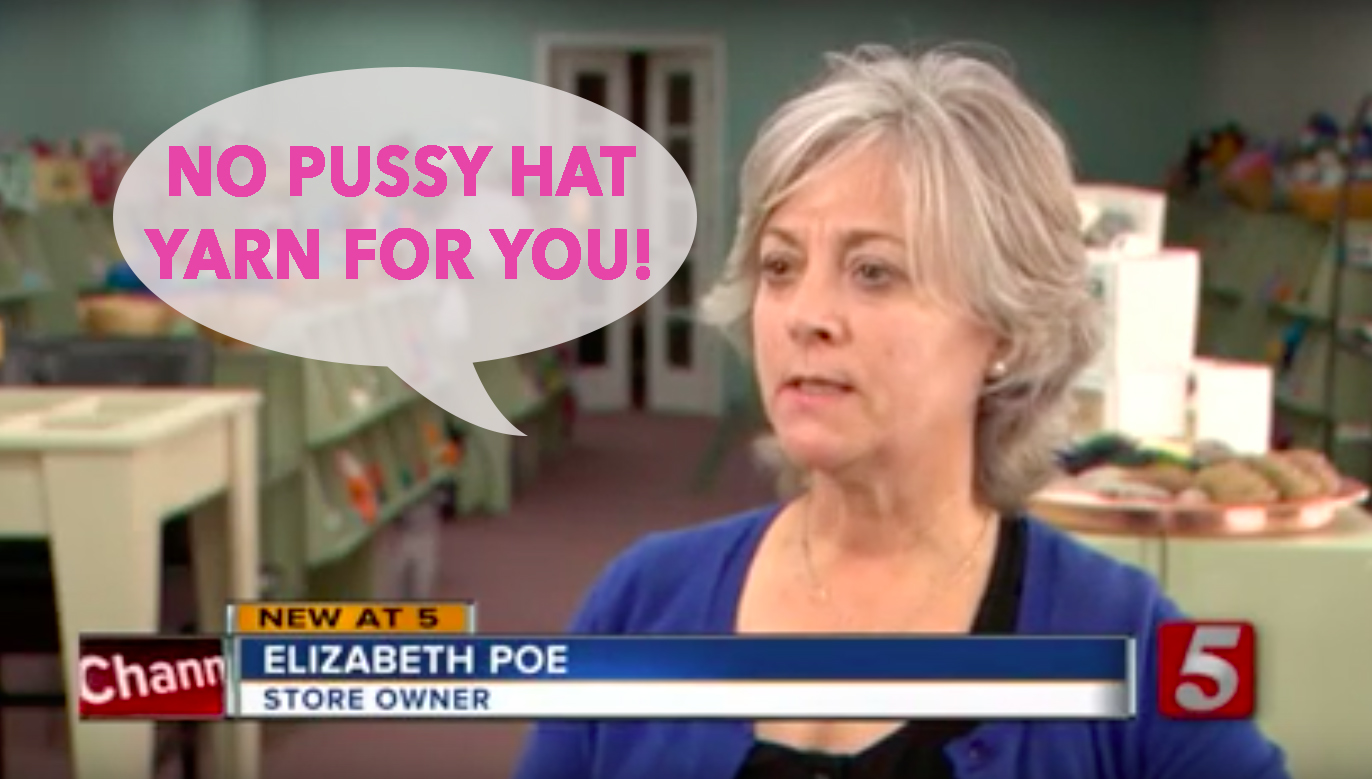 Elizabeth Poe, proprietress of The Joy of Knitting in Franklin, is a female business owner and Williamson County registered voter — which makes it doubly unfortunate that she doesn’t recognize the debt she owes to the women’s liberation movement.

After turning down a sale of yarn to a customer who sought to knit one of the movement’s statement hats, Poe told the customer,

Ma’am, if I had the yarn for the project you are looking for, I said I cannot condone that behavior anymore, and I just can’t sell it.

Soon after, Poe posted a public statement to her store’s Facebook page, making her position clear — along with her ignorance of the movement’s intentions: 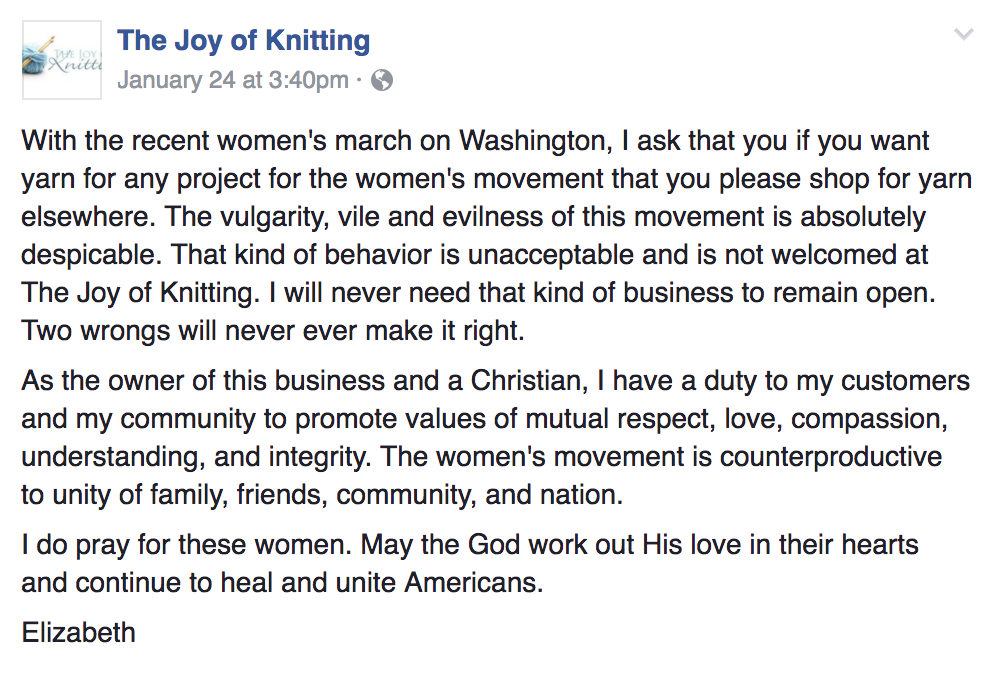 With the recent women’s march on Washington, I ask that you if you want yarn for any project for the women’s movement that you please shop for yarn elsewhere. The vulgarity, vile and evilness of this movement is absolutely despicable. That kind of behavior is unacceptable and is not welcomed at The Joy of Knitting. I will never need that kind of business to remain open. Two wrongs will never ever make it right.

As the owner of this business and a Christian, I have a duty to my customers and my community to promote values of mutual respect, love, compassion, understanding, and integrity. The women’s movement is counterproductive to unity of family, friends, community, and nation.

I do pray for these women. May the God work out His love in their hearts and continue to heal and unite Americans.

Not that it’s much redemption, but she never claimed herself to be anti-feminist (though I’d argue otherwise). Her focus seems to be on the fact that many women in this incarnation of the women’s movement are putting an emphasis on female genitalia, which she considers “vile.” Her disparaging opinion of those who find empowerment in their God-given (if I may) anatomy is a sad testament to her own body image as a woman — likely a byproduct of being brought up in a religion that shames sexuality — especially female sexuality. It’s an unfortunate outlook to hold, but perhaps forgivable given her faith. Setting her prudish, conservative judgment aside, though, the biggest disappointment in her statement is that she does not acknowledge and condemn the origin of “pussy” cropping up in this conversation.

In the case that Poe has selective memory, it’s worth reminding her that “pussy” was a term first introduced into this election’s discourse by the man who won the presidential election, the man we protest. It was Donald Trump who first fired the cannon by making a reference to “pussy” in a vulgar and vile context while bragging about sexual assault into a hot mic before an Access Hollywood interview — and it was the women of this movement who took the term back and used it as a symbol of empowerment.

Where are her steadfast Christian values and condemnation against President Trump? Would she sell him yarn?

We’re all after the same thing. Poe claims to want “mutual respect, love, compassion, understanding, and integrity,” as do the people across our country who marched in defiance of Trump’s vulgarity, disrespect, and division. This was evident in the Women’s March on Washington being deemed “peaceful and positive” and ending with zero arrests.

As Poe said in her interview with NewsChannel5,

I’m not against people standing up, I’m against the way they’re doing it.

Since it’s clearly all a misunderstanding on Poe’s end, I’ll leave the PussyHat Project‘s mission statement to patch things up: