Atheist Soldier Pat Tillman’s Widow Responds to Trump’s Refugee Ban: This Is “Not What He Died For” January 30, 2017 Hemant Mehta

Atheist Soldier Pat Tillman’s Widow Responds to Trump’s Refugee Ban: This Is “Not What He Died For”

Pat Tillman, as many readers are probably aware, was an atheist, a former NFL star, and a soldier who died while fighting in Afghanistan. His widow Marie now runs the Pat Tillman Foundation and she penned a Facebook message denouncing Donald Trump‘s Executive Order banning refugees from Muslim-majority nations (that he doesn’t do business with). 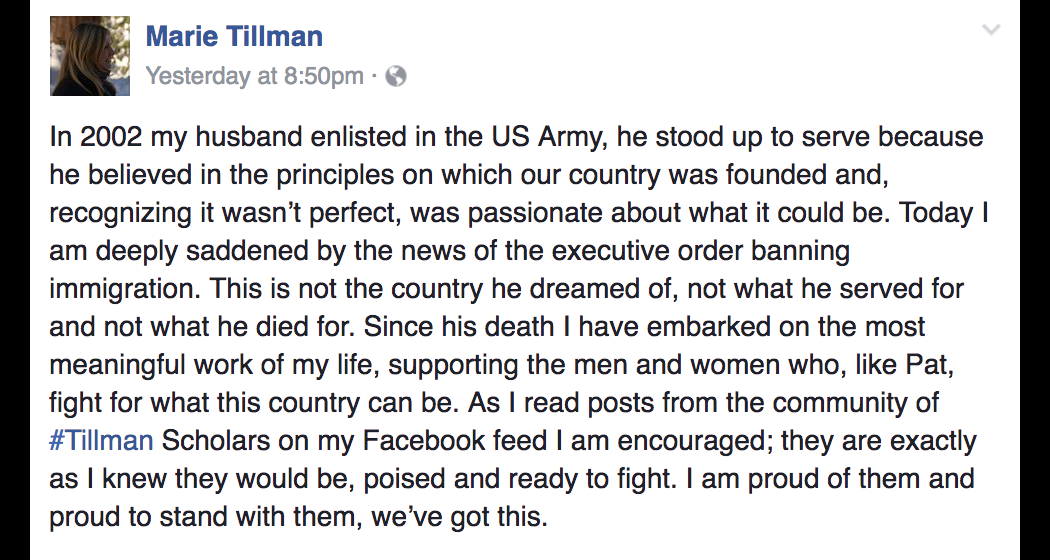 In 2002 my husband enlisted in the US Army, he stood up to serve because he believed in the principles on which our country was founded and, recognizing it wasn’t perfect, was passionate about what it could be. Today I am deeply saddened by the news of the executive order banning immigration. This is not the country he dreamed of, not what he served for and not what he died for. Since his death I have embarked on the most meaningful work of my life, supporting the men and women who, like Pat, fight for what this country can be. As I read posts from the community of #Tillman Scholars on my Facebook feed I am encouraged; they are exactly as I knew they would be, poised and ready to fight. I am proud of them and proud to stand with them, we’ve got this.

Unlike Trump, Tillman and the scholars his foundation now support have sacrificed so much for this country. The President and every Republican who supports him for political reasons insult their contributions with their bigotry.

(via Yahoo. Thanks to Brian for the link)

January 29, 2017
What's the Fastest Way to Make Someone an Atheist?
Next Post