Those of us who criticize the faith-based anti-abortion movement often say that they don’t really care about “life.” If they did, they would be doing much more to prevent the causes of abortion, not just the action itself. They would support comprehensive sex education, access to contraception, universal preschool, universal health care for children — basically, a whole host of things you’ll never hear them talk about because they’re too busy manipulating video footage to convince you that Planned Parenthood is some evil baby butcher that sells fetal body parts to line their pocketbooks.

They, like Trump, know that the facts don’t align with their views, so they promote bullshit. That’s why they don’t deserve to be taken seriously.

But rarely will any of them admit any of this. 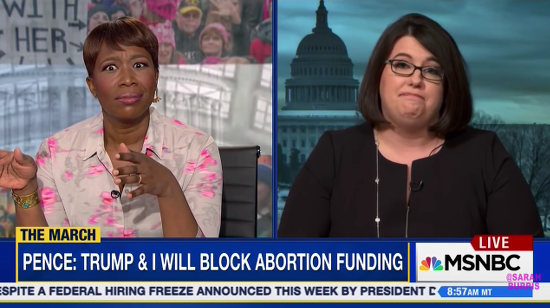 REID: Does everyone who is around this table — and virtually at the table — agree, at least, that contraception should be legal…?

HAWKINS: I believe certain forms could be legal, yes.

REID: What forms could be legal?

HAWKINS: I don’t believe abortion-causing contraception should be legal.

REID: What kind of contraception are you talking about?

HAWKINS: That would be hormonal contraception. IUDs which would terminate the life of an early embryo.

REID: … You think IUDs should be illegal?

HAWKINS: I don’t think they should be legal… They put women at risk and they kill children.

REID: What about the birth control pill?

HAWKINS: I do not think it should be legal, I actually think that shouldn’t be legal…

HAWKINS: In my ideal world, yes.

Just to state the obvious, IUDs and birth control pills prevent pregnancy from occurring. There are no babies or proto-babies involved, and therefore no abortions. Her argument is the sort of thing you would only hear from people who want to control your sex life.

While Hawkins insisted she was only speaking for herself, she’s hardly alone. The forced birth movement will do anything to prevent women from making their own decisions, and they want to make life as difficult as possible for women who disagree.