Donald Trump Will Prioritize Christian Refugees to the U.S. (Everyone Else is Screwed) January 27, 2017 Hemant Mehta

Donald Trump Will Prioritize Christian Refugees to the U.S. (Everyone Else is Screwed)

Donald Trump rallied his base during the campaign by treating Muslims with a broad brush, acting as if damn near all of them were complicit in terrorism — even if they didn’t do anything themselves, surely they knew what was going on. That’s why he didn’t think twice before signing an Executive Order keeping “radical Islamic terrorists” out of our country by preventing Syrian refugees from coming to America.

But Trump is now going even further than that by giving Christian refugees preferential treatment, telling David Brody of The Brody File that he would help them get into the country: 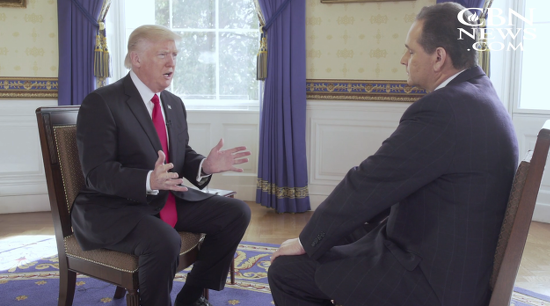 [Christians have] been horribly treated. Do you know if you were a Christian in Syria it was impossible, at least very tough to get into the United States? If you were a Muslim you could come in, but if you were a Christian, it was almost impossible and the reason that was so unfair, everybody was persecuted in all fairness, but they were chopping off the heads of everybody but more so the Christians. And I thought it was very, very unfair. So we are going to help them.

At least some Christians are calling foul on Trump’s comments, saying that Muslim refugees need just as much help as Christians in Islamic countries:

“We would resist that strongly,” Scott Arbeiter, president of World Relief, the humanitarian arm of the National Association of Evangelicals and one of nine agencies that partner with the federal government to resettle refugees.

“Some of the most vulnerable people in the world right now are Muslims. If we say no Muslim should be let in, we are denying the humanity and dignity of people made in the image of God.”

To be clear, the Executive Order doesn’t say “We’re selectively helping Christians.” What it actually says is that the government will…

… prioritize refugee claims made by individuals on the basis of religious-based persecution, provided that the religion of the individual is a minority religion in the individual’s country of nationality.

So they’ll help religious minorities in Muslim countries… which is quite the euphemism for Christ followers. (It’s unclear whether atheists would be included in that mix.)

Vetting is obviously important. It’s not like refugees were coming to America before without it. But to tell a family looking for safety that we can’t help them because they come from a particular country — or to tell them that they’re not a priority to help because they believe in the wrong mythology — is contrary to the values so many of us hold.

As Sen. Chris Murphy said so succinctly this week,

We bomb your country, creating a humanitarian nightmare, then lock you inside. That's a horror movie, not a foreign policy.

What Trump is doing is unconstitutional. Maybe he’d understand that if he ever read it.