After Reporter Asks About Radical Christianity, Former TX State Rep. Calls Him a “Son of a Bitch” January 27, 2017 Hemant Mehta

After Reporter Asks About Radical Christianity, Former TX State Rep. Calls Him a “Son of a Bitch”

Here’s some unsolicited advice: If you market yourself as a family values Christian conservative, don’t go on a profane rant against a reporter who asks you a question you don’t like. 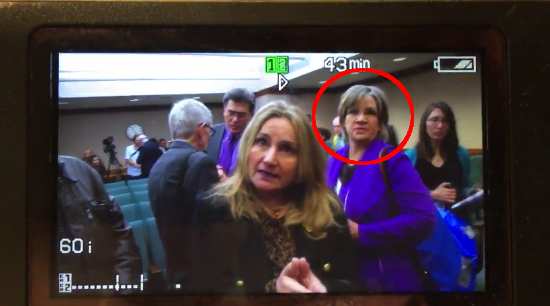 After a forum on countering radical Islamic terrorism, sponsored by State Rep. Kyle Biedermann, reporter Max Gorden of Spectrum News asked a terrific question: What are the legislators going to do to combat religious extremists of other faiths? Were they going to hold forums about radical Christianity or Judaism?

It’s a fair question, given that we’ve seen radical Christians shoot abortion doctors as well as people at Planned Parenthood. If we’re worried about the anomalies among American Muslims, surely we should be just as concerned about extremism within Christianity.

The question wasn’t directed at White, but she chimed in anyway:

I asked Rep. Biederman if he'd also be holding forums on Radical Christianity and Radical Judaism. This is what happened: pic.twitter.com/8pkOuyFPLl

Red-letter words of Jesus, right there.

White has a history of denigrating Muslims in order to elevate her own beliefs. In 2014, on a day when Muslim-Americans lobbied their state representatives on various issues, White instituted a rule that visitors to her office had to sign an allegiance to America, implying that there might be Muslims visiting her office who weren’t patriotic. She also once said on Facebook that “Muslims cannot be trusted no matter how peaceful they appear.”

At least she’s out of office now. Even Texas voters didn’t want her around.

January 27, 2017
A TX Cop Nearly Died in a Crash, But At Least "In God We Trust" Is Still Visible in the Wreckage
Next Post