Christian Right Pastor: Women’s March Participants Are on the “Godless Side” of a “Spiritual” War January 26, 2017 Hemant Mehta

Christian Right Pastor: Women’s March Participants Are on the “Godless Side” of a “Spiritual” War

Christian Pastor E.W. Jackson diminished the significance of the Women’s March on his radio show this week by arguing that participants didn’t represent all women — and that the ones who didn’t attend stayed home to watch Donald Trump‘s inauguration instead.

Those are odd claims to make because the March required far more of an investment in time and money, and getting hundreds of thousands of in-person participants was incredibly impressive. Also, the inauguration and March took place on different days. So there’s that. 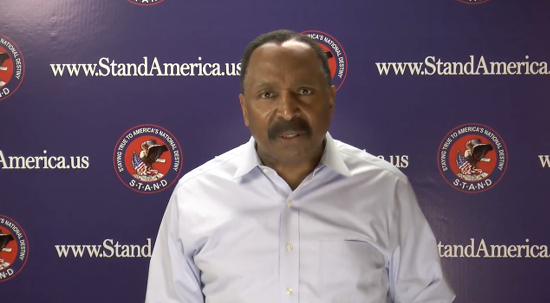 “Women are over half the country,” he said. “That means there are somewhere in the vicinity of 160 million women in America, so let’s not go overboard here in extrapolating from the fact that about a half million of them or so showed up in Washington, D.C., that there’s really some sort of great movement going on among women. It just ain’t so. Most of the women in America stayed home and enjoyed the inauguration, watching it like most people did on television.”

Most women — like most Americans — didn’t watch the inauguration. Nielsen put the viewership at 30.6 million, well under President Obama‘s 37.8 million in 2009.

“America is in the middle of a pitched spiritual battle,” he said. “We are in the middle of the equivalent of a spiritual civil war. That’s what’s happening in America right now and the people represented by those who went to Washington, D.C., to protest are on the godless side in this war. We wrestle not against flesh and blood but against principalities, against powers, against the rulers of the darkness of this world, against spiritual wickedness in high places, so what we’ve got to do now is put on the whole armor of God to be able to stand against the wiles, the stratagems, the strategies, the tricks of the devil.”

Umm… I wish atheists could get hundreds of thousands of people to D.C. But as we’ve learned a few times over, that ain’t happening. The Women’s March included huge numbers of religious people unhappy with the direction this country is heading. I’m sure they don’t appreciate having a pastor question their faith.

But that’s how the Religious Right works. The only Christians who count are the ones who think exactly as they do.

January 26, 2017
Televangelist Rick Joyner: God Visited Our Church as a Cloud and Made It Rain Inside the Building
Next Post

January 27, 2017 How Would Neil deGrasse Tyson Explain Donald Trump to Someone Who's Lived on Mars for Decades?
Browse Our Archives
What Are Your Thoughts?leave a comment