New Mexico City Councilor Responds to Sunday’s March By Saying Women “Have a Right to Get Slapped” January 25, 2017 Hemant Mehta

On Sunday, the day after the Women’s March, Carlsbad City (NM) Councilor J.R. Doporto went on Facebook and posted this message, which I guess he thought was entertaining: 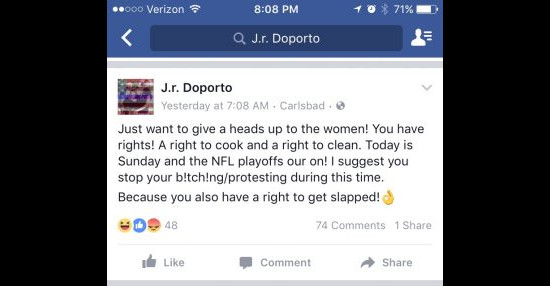 Just want to give a heads up to the women! You have rights! A right to cook and a right to clean! Today is Sunday and the NFL playoffs our on. I suggest you stop your b!tch!ng/protesting during this time. Because you also have a right to get slapped!

Doporto later said he was only joking, but in an interview with the Santa Fe Reporter, it was apparent that he thoroughly believed in the sentiment underlying his post.

Yeah, yeah. I was thumbing my nose at what was taking place. Enough already. Let’s get on. Women have had rights for … years that I have been alive. I don’t see no rights they don’t have that a man has. When are they going to get on and move on? I believe if a Democratic president was elected, Hillary, I don’t think we would’ve had those protests.

What?! You mean they wouldn’t have marched if Clinton was elected? He’s a smart one, this guy…

He clearly doesn’t get that women’s issues, like access to birth control and despicable treatment by people in power (including by pussy-grabbing Donald Trump), are still being debated in a way men’s rights aren’t. Marchers also cared about immigration reform, racial inequality, income disparities, etc. That’s what the protest was about.

Also troublesome was how Doporto justified his message as a matter of having a different opinion. As if that’s what the controversy was all about. And he brought up an example of how he, unlike his critics, was fully respectful of people he disagreed with:

We’re all different. That’s the great thing about America. We all have the right to our own views. A lady called me from California earlier. She was an atheist. When I got off the phone with her, I said, “God bless you.” She said, “I’m an atheist.” Well, she’s got every right. Right? So where do we draw the line?

How dare that woman say such a horrible thing…? Good thing we have an open-minded councilor to show us how the mere mention of someone’s atheism is totally equivalent to joking about assaulting women and telling them to shut the hell up.

Doporto also justified his behavior by saying “you see Donald Trump tweeting all the time,” as if that made it okay.

He has since deleted his Facebook account, and there’s a petition calling on him to resign. Not a bad idea. If he left the city council, he’d have more time being an asshole at home, which is clearly what he enjoys most.

January 25, 2017
African Celebrity Furious After Church's Anti-Gay Sermon: "I Am a Gay Man... Let God Deal With Me."
Next Post

January 25, 2017 A Tornado That Killed Four People Didn't Ruin a Bible Inside a Destroyed Church, So God Loves Us
Browse Our Archives
What Are Your Thoughts?leave a comment