Surprise, surprise. We elected an administration with a profound disrespect for science, evidence, and facts, and the consequences are hitting us quickly.

On Tuesday night, Reuters reported that the Trump administration demanded that the Environmental Protection Agency take down the climate change page from its website. 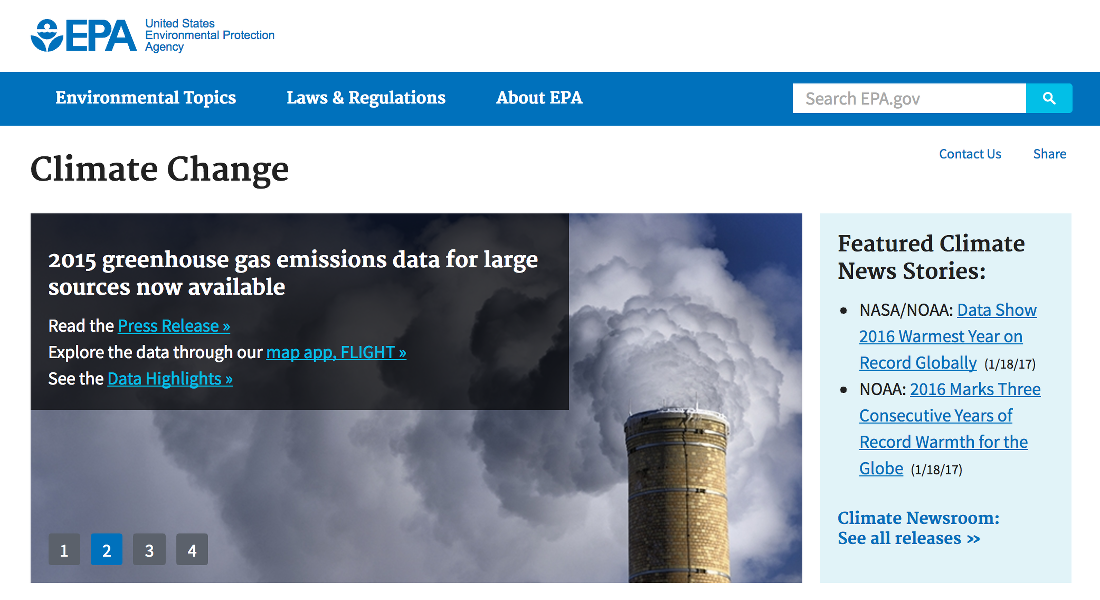 The employees were notified by EPA officials on Tuesday that the administration had instructed EPA’s communications team to remove the website’s climate change page, which contains links to scientific global warming research, as well as detailed data on emissions. The page could go down as early as Wednesday, the sources said.

“If the website goes dark, years of work we have done on climate change will disappear,” one of the EPA staffers told Reuters, who added some employees were scrambling to save some of the information housed on the website, or convince the Trump administration to preserve parts of it.

Why muzzle the science? Because it would go against the narrative Republicans want to push about the environment: That it’s not in immediate danger, that carbon emissions don’t need to be regulated, that the scientists who understand global warming are big of some worldwide hoax.

This comes a day after other scientific agencies were told to shut the hell up about all the work they do and the results of their own investigations:

According to press reports, the USDA’s main research branch was told to stop communicating with the public on Monday, a ban that includes everything from releasing documents to posting on Twitter. Also on Monday, EPA employees were reportedly told they can no longer post updates on social media and were warned that any communication with the press would be heavily vetted.

The communications ban directly contradicts scientific integrity policies at each agency that highlight the importance of communication between the public and agencies that are spending tax dollars to conduct government research.

To restate the obvious: Republicans aren’t silencing scientists because they’re wrong. They’re doing it because the truth stands in stark contrast to the world they want to live in, and they’re hoping that threatening the experts will allow them to push through all the anti-science policies they want.

They can get a climate change denier, Scott Pruitt, to head the EPA. They can get Betsy DeVos, who wants sham science taught alongside evolution, installed as head of the Department of Education. They can tell automakers to stop worrying about supposedly onerous regulations because they’ll be lifted. They can drill for more oil.

This is dangerous, this is censorship, and this is what happens when you put Republicans in charge. This isn’t merely about Donald Trump. This wouldn’t be happening unless GOP officials went along with it.

Both parties are not the same. The last election was never a debate about the “lesser of two evils” unless you were so ignorant that you couldn’t tell the difference. There is one major political party that respects science and one that rejects objective truth and scientific evidence.

This is only the beginning.

But at least Trump didn’t use a private email server, right?

January 24, 2017
Christian Hate-Pastor Tells Congregation How to Convert Hindus: Remind Them Their Lord is Satan
Next Post

January 25, 2017 That Is a Strange Way to Show Me You Love Me
Browse Our Archives
What Are Your Thoughts?leave a comment