In Bangladesh, Textbooks Are Inching Toward Islam; 17 Works Deemed “Atheistic” Have Been Removed January 24, 2017 Hemant Mehta

In Bangladesh, Textbooks Are Inching Toward Islam; 17 Works Deemed “Atheistic” Have Been Removed

How theocratic is Bangladesh becoming? If the textbooks are any indication, the ostensibly secular country appears to be heading in the dangerous direction of Saudi Arabia or Iran. 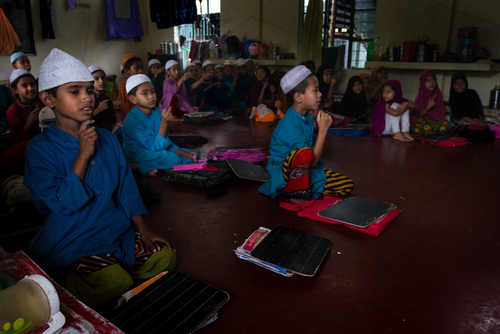 Bangladesh’s Education Ministry was preparing to print the 2017 editions of its standard Bengali textbooks when a group of conservative Islamic religious scholars demanded the removal of 17 poems and stories they deemed “atheistic.”

By the time the books were distributed to schools on Jan. 1, the 17 poems and stories were gone, with no explanation from the government. Other changes had crept in, too: First graders studying the alphabet were taught that “o” stands for “orna,” a scarf worn by devout Muslim girls starting at puberty, not for “ol,” a type of yam; and a sixth-grade travelogue describing a visit to the Hindu-dominated north of India was replaced by one about the Nile in Egypt.

They’re subtle shifts, but all religious leaders know indoctrination has to happen early, before kids can start thinking for themselves. The more Islam they ingest, the less exposure they have to secular or alternative ways of thinking, the easier it will be to control them down the line.

Remember: This is already a nation where several atheists have been assassinated over the past few years for daring to speak up. Even though the nation has taken action to prevent further violence, 82% of Muslims in the country want to see Sharia Law take effect.

January 24, 2017
Bus Driver Who Refused Fingerprinting, Calling It the "Mark of the Devil," Sues Former Company
Next Post