This is a Bizarre Reason for Why Your County’s Invocation Policy Shouldn’t Be Written Down January 23, 2017 Hemant Mehta

David Suhor is the Florida church/state separation activist who has drawn a lot of attention for his Satanic invocations at city council meetings.

At a meeting of the Escambia County Board of County Commissioners earlier this month, he had some support, too.

During the public forum, Kathryn Howard, President of the University of West Florida’s Secular Student Alliance, spoke about how she supported Suhor and the Constitution and called for the end of invocations at meetings since the Board showed no signs of being inclusive of non-Christian speakers: 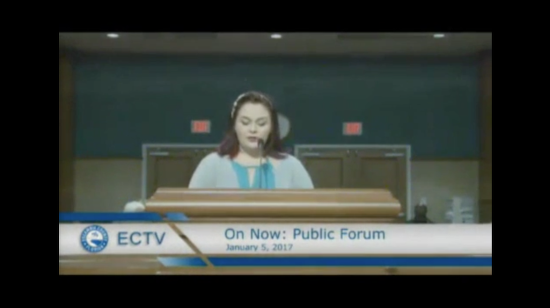 As administers of local government who are censoring essentially all non-Judeo-Christian prayer, you are taking part in constitutionally suspect activity. By providing Judeo-Christian invocations at almost every single meeting, this board is in direct violation of the United States Constitution.

You have heard from multiple secular activists in the community, and I’m now adding myself into the mix. Gentlemen, you are digging yourselves a hole and burying yourself with one of our Nation’s founding documents.

SSA at UWF stands with these secular activists in the condemnation of the Escambia Board of County Commisioner’s lack of policy to ensure religious equality and fairness for religious minorities.

Finally, SSA at UWF energetically affirms the only way to ensure religious minorities are not discriminated against is by eliminating invocations all together in favor of an inclusive moment of silence.

Andre Ryland, a plaintiff in a lawsuit to remove a giant cross from a public park in Pensacola, also spoke in support of Suhor.

The bizarre response from Board member Grover Robinson was that the atheists were trying to use the Constitution to “defend only what you want to.” As if a neutral, inclusive policy was somehow anti-Christian.

But the kicker came from Board member Jeff Bergosh, who bragged about his Christianity, said the majority of the County belonged to the same faith (as if that matters), and argued the informal invocation policy was perfectly fine as is, adding, “I certainly don’t support any sort of written policy, ’cause then those get eviscerated and beat up and then we’re in court.”

If a written policy lands you in court, it’s because it’s a bad policy. Counties with neutral invocation policies never have to worry about this.

You’d think a man who’s been in verbal battles with Suhor before would understand that.

The policy will only change if people speak up, so I’m grateful to Suhor, Howard, and Ryland for showing that non-Christians have a voice in this community, too.

January 23, 2017
Men Charged with Rape Will Bring Bible to Court, Calling It "The Only Law Book That Truly Matters"
Next Post