The University of Texas at Austin’s Medical School Will Soon Train Students at a Catholic Hospital January 23, 2017 Hemant Mehta

The University of Texas at Austin Dell Medical School opened last summer, and next year’s incoming class will have the opportunity to do clinical work at the soon-to-open Dell Seton Medical Center. It’s a $310 million facility that is funded by taxpayer dollars, the UT System, and several other sources. 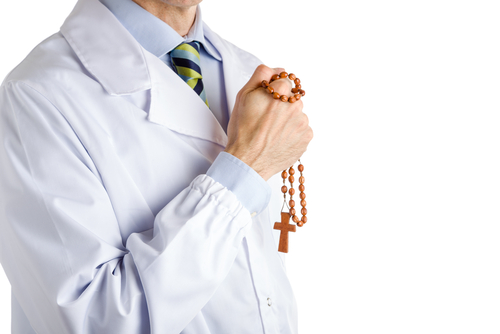 The problem? It’s a Catholic hospital that forbids certain kinds of health care if it’s opposed by the Church. No abortions, no birth control, no vasectomies, no tubal ligations, etc. These hospitals now represent 1 out of every 6 hospital beds in the country.

Why is a public medical school affiliated with a religious hospital? Why are taxpayers footing the bill for a religious institution? And what are the implications for the students who won’t be getting a comprehensive education at the facility?

Mary Tuma takes a long look at these questions in the latest issue of The Austin Chronicle:

A women’s health champion and registered nurse, Rep. Donna Howard, D-Austin, has fought to expand access to reproductive health care during her time at the Lege. She says the limitations of women’s health care at Seton have become an ongoing discussion.

“There have been efforts to make sure women will not be denied services — they can go to [non-Catholic] St. David’s for what’s not allowed at Seton — but I don’t think that has totally been worked out. I’m not convinced that there aren’t still gaps in service,” said Howard. “And the fact that we have public dollars involved makes it even more imperative that women are receiving the services they need.”

Even more troubling is the fact that Seton employs and credentials Sexual Assault Nurse Examiners yet bars emergency contraception for survivors of sexual assault if they are ovulating because of its religious practices. “The area emergency medical services providers’ default protocol is to transport sexual assault victims to a facility other than one operated by Seton,” states Seton ERD guidelines.

So there’s an answer to one of the pressing questions: Students will still get the full range of clinical experiences, but it will require going to a non-Catholic hospital.

But what about the legality of it all?

Americans United for Separation of Church and State sent a letter to the relevant parties in 2013 calling this union a violation of the Establishment Clause. However, the letter didn’t resolve all the issues:

[Associate legal director Alex] Luchenitser says AU has had discussions with officials involved, and while some concerns were allayed, not all were put to rest. However, AU did not further pursue the matter, in part because it’s often difficult to find someone to serve as a plaintiff in a lawsuit of this kind.

That’s the kicker. No lawsuit can proceed unless there’s a plaintiff willing to take on the system. So for now, the school and the medical center will be working together. Medical students who want to help patients will soon be confronted with the reality that some services at their clinical site are forbidden because a group of Catholic bishops puts dogma over patient care.

January 23, 2017
This is a Bizarre Reason for Why Your County's Invocation Policy Shouldn't Be Written Down
Next Post

January 23, 2017 The Six Rules That Define "Secular Hymns"
Browse Our Archives
What Are Your Thoughts?leave a comment