Men Charged with Rape Will Bring Bible to Court, Calling It “The Only Law Book That Truly Matters” January 23, 2017 Hemant Mehta

Men Charged with Rape Will Bring Bible to Court, Calling It “The Only Law Book That Truly Matters”

53-year-old Timothy Ciboro and his son, 28-year-old Esten Ciboro, will be in an Ohio courthouse today, charged with “rape, kidnapping, and endangering children” over a period of three years. Their alleged victims include a “13-year-old who said she was shackled in the basement at various times.”

It’s disturbing stuff, and it doesn’t look like they have much of a defense strategy given that they’re representing themselves in court (though there are court-appointed defense attorneys on standby in case they’re needed). But they don’t seem to be worried because the judge approved their only request: 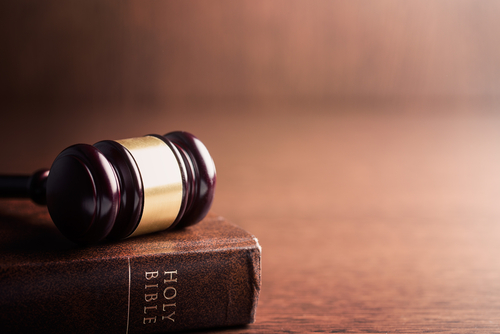 Calling it “the only law book that truly matters,”Esten Ciboro… said he would like to have his Bible with him as a reference.

“There’s a great deal of strategy in Scripture and I use those strategies in everything I do,” Esten Ciboro told the court.

So… a book that features rape, murder, and genocide as part of God’s Plan is what they’re hoping will be their Get Out of Jail Free card.

The intention was to “use God’s holy word to ask questions, questions that we believe are absolutely vital to our case” when they look at potential jurors today, but the judge said they would not be able to use the Bible to that end.

Imagine the outrage from conservative Christians if the accused men asked for a Qur’an for the same purposes. It would be seen as an indictment of Islam as a whole, not an exception. Now take a moment to note their silence in this case. If they say anything, it’ll be excuses and rationalizations why these men aren’t True Christians™. I’m not saying they represent most Christians in any way, but they sure as hell revere the same book.

January 23, 2017
"Acrobatic" Baby Baptisms Are Disturbing to Watch
Next Post