Christian Right Leader: Donald Trump, the 45th President, Is Like the King Prophesied In Isaiah 45

Cyrus the Great, who ruled over Persia and freed the Jewish people, is relevant to Christians because the prophet Isaiah supposedly predicted his birth and what he would do with his life in Isaiah 45.

But wait! 45?! Donald Trump is the 45th President! THERE MUST BE A CONNECTION. 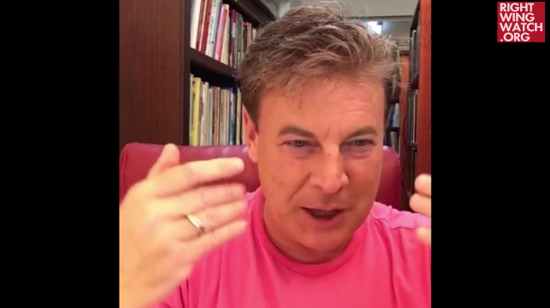 At least that’s what Christian Right activist and Trump enthusiast Lance Wallnau told a group of believers just before the inauguration.

“I said, ‘Isaiah 45?’ The Lord said, ‘The 45th president is Isaiah 45,'” Wallnau stated. “First of all, I went to Google to see if the next president was the 45th and indeed it’s the 45th president. Then I went to Isaiah and I read: ‘Thus saith the Lord that Cyrus whom I have anointed, I will break open for you the two leaved gates of Babylon and I will drain the river dry.'”

“Cyrus, historians say, snuck into Babylon without a fight because He drained the river upstream and marched his soldiers through so they came through the gates without any resistance,” Wallnau added. “Cyrus was the individual who the prophet Isaiah prophesied 100 years before he came to power and said that he is being raised up for Israel’s sake, for God’s people.”

Wallnau believes that God has “intervened in American politics” for the Church and for Israel.

Obviously… how could the 45 thing be a coincidence?! That’s unpossible!

But Wallnau isn’t the only person who can play this game. Watch!

And 470,000 is the estimated crowd in Washington, D.C. for the Women’s March over the weekend.

Therefore, Donald Trump needs to stop lying at every turn since there are large numbers of people ready to resist him.

Wallnau made headlines in November when he told a radio audience that the Access Hollywood tape of Trump bragging about committing sexual assault was just part of God’s Plan.

(Screenshot via Right Wing Watch. Thanks to Brian for the link)

January 23, 2017
The Six Rules That Define "Secular Hymns"
Next Post