At the Orthodox Holy Trinity Cathedral in Tbilisi, Georgia, baptizing babies appears to be an Olympic sport: 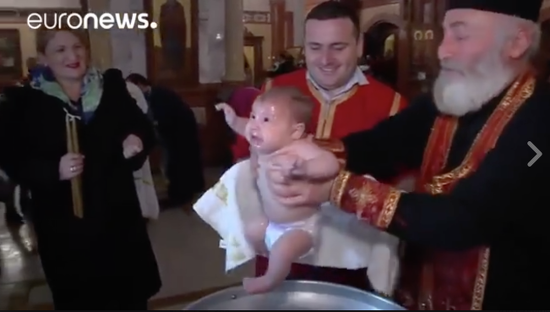 The event was part of a mass baptism on Thursday:

The mass baptism was an invention of Patriarch Ilya II, considered one of Georgia’s most influential men.

He came up with the idea to stimulate the country’s low birth rate, promising to personally baptise every third child in each family.

Why would any parents seeing their baby flipped around like that ever want to have more children…? I have no idea.

Here’s a question worth discussing, though: If this didn’t happen in a church, and it wasn’t called a “baptism,” and the baby-dunker wasn’t wearing religious garb, would society be okay with his actions? Or would we call it child abuse?

January 23, 2017
Jesus is Coming Back to the White House to Guide Donald Trump's Hand in These Absurd Memes
Next Post

January 23, 2017 Men Charged with Rape Will Bring Bible to Court, Calling It "The Only Law Book That Truly Matters"
Browse Our Archives
What Are Your Thoughts?leave a comment