A few days ago, just before Mike Pence became Vice President, hundreds of protesters gathered in an area outside his new home in Washington, D.C. and held a “Queer Dance Party” in protest of his bigoted views on LGBT rights. 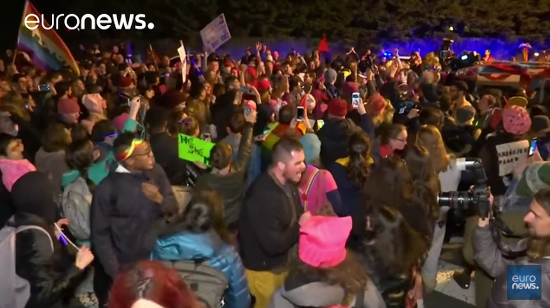 The Washington Post noted that the protest took place “several blocks away from Pence’s rental house.” They weren’t on his lawn or anything.

Anti-gay activist Peter LaBarbera was appalled by the demonstration — and the media’s positive coverage of it — and boiled his rage down to one simple question:

… can you imagine media’s reaction if conservatives did this to Obama’s VP?

Because, unlike Pence, Joe Biden‘s reputation isn’t built on discrimination. What the hell would hundreds of people protest with Biden? His Amtrak love?

You protest bigotry and hatred and discrimination, not the people who fight against it.

That’s why today’s Women’s March on Washington will likely draw a larger crowd than the one Donald Trump saw yesterday. The marchers are fighting to protect the rights of women everywhere — rights which Trump and his allies have repeatedly threatened to take away.

What LaBarbera wants is for gay people to get “cured” or go back into the closet. Treating them as human beings deserving of equal treatment under the law goes against everything he stands for.

The suggestion that conservatives would never do this offensive thing that liberals are doing is absurd, too. It’s a false equivalency. Conservatives spent the past eight years lying about Obama’s birthplace, agenda, and effectiveness. Liberals don’t have to lie about what Trump and Pence will do in office; they just have to quote them verbatim. That’s why this protest took place; it was in direct response to things Pence has said and done against the LGBT community.

Yet somehow, LaBarbera saw the dance party as “hateful,” “intolerant,” and “morally corrupt.”

When liberals force women to have babies against their will or force pastors to endorse gay marriage from the pulpit, let’s talk. Until that time, keep dancing.

January 21, 2017
The Christian Spectrum of U.S. Presidents
Next Post