Donald Trump‘s inauguration speech is in the history books, and it was jarring for how dark it seemed. Forget the inspiration, lofty rhetoric, references to our shared history, or a broad vision of our future that we heard from his predecessors. Trump promoted isolation and selfishness.

There was plenty of religion, too. 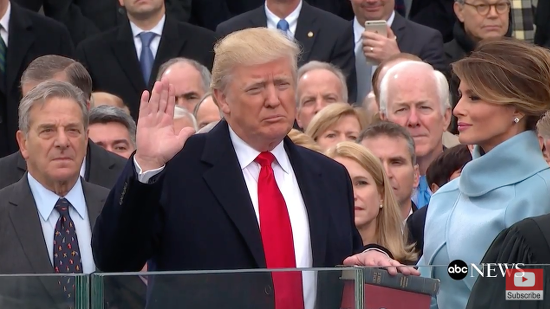 That’s not unusual. Even President Obama mentioned “God” a number of times in 2009 and 2013. But he did more than that.

In 2009, for the first time ever in an inaugural address, Obama mentioned atheists (though he used a different word):

For we know that our patchwork heritage is a strength, not a weakness. We are a nation of Christians and Muslims, Jews and Hindus, and non-believers.

It was only lip service, I know, but it was a symbolic gesture we had never experienced before and it was a big damn deal to some of us. We were as much a part of America as anyone else, and a new President was finally acknowledging that.

In 2013, Obama spoke positively of the contributions of gays and lesbians in the fight for civil rights:

We, the people, declare today that the most evident of truths –- that all of us are created equal –- is the star that guides us still; just as it guided our forebears through Seneca Falls, and Selma, and Stonewall…

It is now our generation’s task to carry on what those pioneers began. For our journey is not complete until our wives, our mothers and daughters can earn a living equal to their efforts. Our journey is not complete until our gay brothers and sisters are treated like anyone else under the law. For if we are truly created equal, then surely the love we commit to one another must be equal as well.

The Bible tells us how good and pleasant it is when God’s people live together in unity.… we will be protected by God.

Those lines might not raise many eyebrows on their own, but it reconfirmed what so many of us fear: That Trump cares very little, if at all, about non-Christians.

For a President who’s been called an atheist — and is certainly ignorant of his own self-professed faith — he never seems to stop pandering to his religious base. What’s more concerning is that he’ll likely work to deliver everything they want.

This is just Day One. It’s not going to get any better.