The Creationists at Answers in Genesis have a brand new not-even-cable-access worthy TV show called Answers News — which is ironic, since Creationism never changes or improves, leading to a complete lack of “news” — and they spent part of the first episode ripping on Neil deGrasse Tyson. 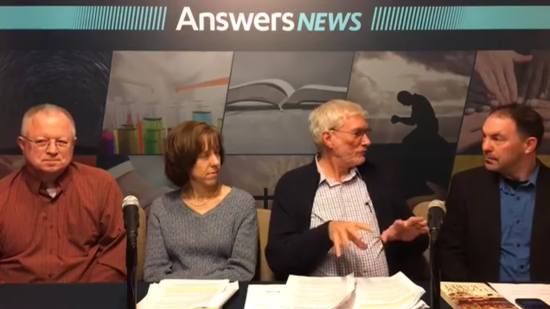 The whole exchange stems from something Tyson said to PC Magazine last month:

A free country means freedom of speech, freedom of thought. Sure. But if now you have a position of power over others and you take your belief system, which is not based in objective truth, and apply it others who don’t share your belief system — that is a recipe for disaster. It’s the beginning of the end of an informed democracy.

HAM: … Of course [Neil deGrasse Tyson] mocks Creationists. He’s the one that says We come from stardust.

HAM: That we’re made of the stars and if stars hadn’t exploded, and so on, we wouldn’t be here today.

HODGE: And he said to worship the stars and things like that.

HAM: And totally rejects God. And, of course, he says that people who believe in Creation, like us, are anti-science…

First of all, Tyson never told people to worship the stars. (They may be confusing him with astrophysicist Lawrence Krauss, who once memorably said, “Forget Jesus. The stars died so that you could be here today.”) Tyson also goes out of his way to reject the “atheist” label for reasons he’s explained countless times.

After Ham read Tyson’s statements, the panel criticized Tyson for dismissing their beliefs as outside the realms of objective truth. They also argued that public school teachers, by pushing a secular science curriculum, are imposing their own “faith” on students.

The panel seems to have ignored what Tyson said just moments earlier in the same interview:

The good thing about science is that it’s true whether or not you believe in it. Now, I should sharpen that. That’s the catchphrase, but really, the methods and tools of science when invoked, what role they serve is they find what is true, completely independent of who it is that’s doing the finding.

The methods and tools the key here. The “religion” of secularism isn’t being imposed on students. Evidence-based science and reality are.

Even if we had to start from scratch, the realities of science would eventually be discovered again. If the Bible were never written, on the other hand, we would just have one less Creation myth going around. That’s why we don’t teach Christian mythology in school — it’s not based on any evidence.

There was one other instance of scientific ignorance around the 23:00 mark, during a brief discussion of climate change. As you’d expect, they deny the reality of the rapidly changing climate and human contribution to that effect. It led to this exchange:

HODGE: That’s right. Yeah, I mean, look at this: It’s January, and it’s not freezing cold out today.

And Hodge understands the debate so well, he’s pulling the Answers in Genesis equivalent of Senator Jim Inhofe bringing a snowball into the Senate to disprove global warming.

This was just the first episode. They already shared everything they know but they think they’re capable of more. We’ll be watching.

January 20, 2017
Separation of Church and State? Not Today, That's For Sure
Next Post