Gwyneth Paltrow is known for a lot of things. Providing an easy costume for women who want to look hot but still kind of artsy and intellectual on Halloween, appearing in movies and television shows that will let her sing even though probably no one would buy her album were she to release one, being incredibly blind to the fact that most people in this country are not anywhere near as wealthy as she is, and dispensing incredibly bad vagina advice to anyone who will listen.

Previously, Paltrow has encouraged women to steam-clean their vaginas, a practice that is both absurd and possibly dangerous.

Now she wants us to walk around with some $60 jade eggs stuck up in there all the time. Fun! 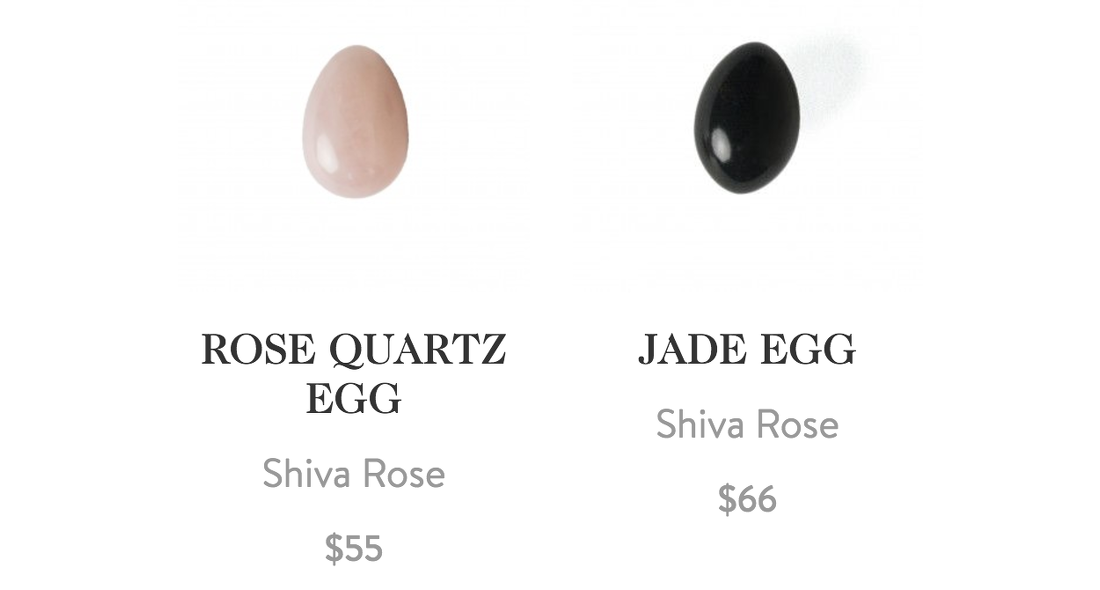 In an interview on GOOP, her weekly lifestyle newsletter, “beauty guru/healer/inspiration/friend” Shiva Rose (who may or may not be the same Shiva Rose that used to be married to Dylan McDermott) explains that these jade eggs were once the “strictly guarded secret” of Chinese royalty and concubines, which “harness the power of energy work, crystal healing, and a Kegel-like physical practice.”

The whole “yoni egg” thing has been a thing in New Age alternative medicine circles for a while now. I can’t tell if the whole thing about them being an “Ancient Chinese Secret” is true or not — though the fact that “yoni” is a Sanskrit word and not a Chinese one makes me a tad suspicious. I’ve tried to research it, but the only mentions of this practice I can find come from woo-ish websites. For some reason, I just can’t find a single museum with a “Great Yoni Eggs of the Concubines” exhibit. The only “Ancient Chinese Secret” for vaginal improvement that I am aware of is foot-binding, a practice we may see praised in a future edition of GOOP.

Anyway! Shiva Rose is very concerned that you are using your yoni as a “psychic trash bin” and these eggs can apparently help you not do that.

The word for our womb, yoni, translates as “sacred place”, and it is a sacred place — it’s where many women access their intuition, their power, and their wisdom. It’s this inner sanctum that we can access when it’s not in use creating life. Sadly most people use it as a psychic trash bin, storing old or negative energy. I see it as a place to celebrate ourselves as sexual, powerful beings, or as mothers, not a place to carry negative or un-dealt-with emotions.

As Dr. Jen Gunter, America’s preeminent Gwyneth-debunker, explains, yoni doesn’t just mean “womb.” It refers to the whole female reproductive system. And to suggest that this is where we “access” power and wisdom is to suggest that women who don’t have a uterus or a vagina are somehow lacking in power or wisdom, which is both insulting and scientifically moronic.

However, in the interest of being thorough and considerate of both sides, I checked my own “yoni” and found exactly zero pieces of psychic trash stored up in there.

Not even a stray picture of an ex-boyfriend.

But what, exactly, are the benefits of walking around with a jade egg up your hoo-ha? Shiva Rose explains!

The jade creates kidney strength — it’s known as jing in Chinese energy, and it’s all about sexual potency, and even beauty — if your hormones are balanced, your skin will look better. It’s a holistic combination of things, where one benefit builds to another. Jade also takes away negativity and cleanses — it’s a very heavy material, very powerful.

No, the jade does not do that. Jade is very pretty, but it is not going to improve your skin, or “intensify feminine energy,” or anything like that.

Of course, the problem with this jade egg thing isn’t just that it doesn’t do magic. If it was just some stupid woo thing for rich white ladies who think they can find enlightenment by schlepping around with a $60 rock in their vadge, it wouldn’t be a big deal.

The problem is that it’s actually bad for you and you shouldn’t do it.

As for the recommendation that women sleep with a jade egg in their vaginas I would like to point out that jade is porous which could allow bacteria to get inside and so the egg could act like a fomite. This is not good, in case you were wondering. It could be a risk factor for bacterial vaginosis or even the potentially deadly toxic shock syndrome.

Regarding the suggestion to wear the jade egg while walking around, well, I would like to point out that your pelvic floor muscles are not meant to contract continuously. In fact, it is quite difficult to isolate your pelvic floor while walking so many women could actually clench other muscles to keep the egg inside. It is possible the pained expression of clenching your butt all day could be what is leading people to stare, not some energy glow.

Overenthusiastic Kegel exercises or incorrectly done Kegel exercises are a cause of pelvic pain and pain with sex in my practice. Imagine how your biceps muscle (and then your shoulders and then your back) might feel if you walked around all day flexed holding a barbell? Right, now imagine your pelvic floor muscles doing this.

Ouch! And if the threat of physical pain doesn’t deter you from doing this, imagine the awkward funeral you’d have if you died from toxic shock because you took bad vagina advice from Gwyneth Paltrow! People walking around telling your parents, “Sorry for your loss, but I’m sure Barbara died with a really magical vagina.”

January 18, 2017
This Former Evangelical Became an Atheist After Seeing Fellow Christians Fight Against Obamacare
Next Post