A Pakistani mother has been given the death penalty after burning her daughter alive for daring to elope with her boyfriend instead of going through with an arranged marriage. 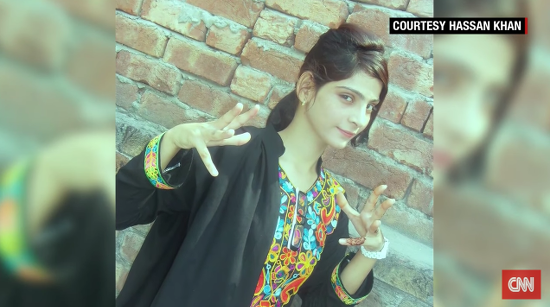 18-year-old Zeenat Rafiq (above) got married to Hassan Khan last summer and they fled to safety in the days following the private ceremony. But when Rafiq’s relatives reached out to her asking her to come home so they could plan a more elaborate ceremony, she took the bait.

It was a trap.

… there was no celebration on her return to the family’s home in Lahore, Pakistan. Instead, her mother and brother beat and strangled her, then tied her to a cot, doused her in kerosene and lit her on fire, according to reports at the time.

After the attack, [Perveen] Bibi ran outside and yelled, “I have killed my daughter for misbehaving and giving our family a bad name,” the mother’s sister told Agence France-Presse at the time.

Authorities arrested the mother and later Rafiq’s brother, Anees Rafiq, and charged them in the young woman’s death. The mother confessed almost immediately, telling police, “I have no regrets,” according to the Associated Press.

Most Muslims would denounce the “honor killing” and say it has no basis in their faith, but the culprits never seem to say the same thing. There’s always a religious reason for their actions.

I suppose we should be glad that, in this case, there was some sort of punishment for Bibi. I don’t support the death penalty, and killing her doesn’t give her any chance at understanding what she did wrong. Still, too many of these “honor killings” in the past have gone unpunished. There’s finally justice for one of the victims.