Italian Archbishop Blames Stupidity, Atheism, and a Weak Church for the Rise of Islam

Of all the things you’d expect to find in a more secular society, the universal embrace of Islam is probably not very high on the list. But Monsignor Carlo Liberati, bishop emeritus of Pompeii, said that atheism and overall stupidity will lead to a stronger Islam.

He made the comments last week in the Catholic journal La Fede Quotidiana (translated below): 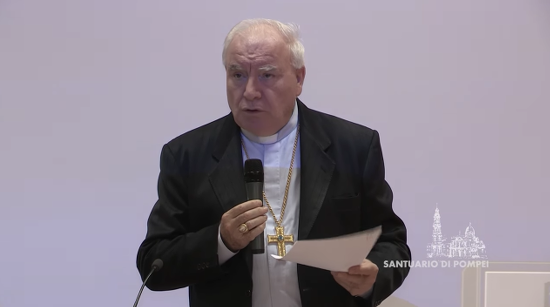 The Bishop Emeritus of Pompeii said: ‘In 10 years we will all be Muslims because of our stupidity. Italy and Europe live in a pagan and atheist way, they make laws that go against God and they have traditions that are proper of paganism.

‘All of this moral and religious decadence favours Islam.’

He added: ‘We have a weak Christian faith. The Church nowadays does not work well and seminaries are empty.

‘Parishes are the only thing still standing. We need a true Christian life. All this paves the way to Islam. In addition to this, they have children and we do not. We are in full decline.’

Liberati also took a Make Italy Great Again stance by blaming immigrants for the problem. It caused the government to take its eye off the ball: protecting real Italians.

Liberati claimed Italy’s desire to help other countries is impacting its own population.

He said: “We help without delay those coming from outside and we forget many poor and old Italians who are eating from the trash.

“We need policies that take care of Italians first: our young people and the unemployed.”

Or the government can work on both issues at once. Taking care of people isn’t a zero-sum game. More to the point, treating immigrants like shit isn’t going to create a better nation.

And blaming the decline of Christianity for the rise is Islam is absurd. One form of nonsense isn’t going to stop the rise of another form of nonsense. A skeptical, secular society that values reason and evidence over faith and dogma is a much stronger bulwark against irrationality.

If fighting Islam is his goal, then he ought to be thanking atheists, not condemning us.

January 17, 2017
South Dakota Republicans Propose Legislation to Weaken the Teaching of Evolution in Schools
Next Post

January 17, 2017 The Atheist Lobby’s Leader in Washington Reflects on His First Year in the Position
Browse Our Archives
What Are Your Thoughts?leave a comment