A comedian mocked the Catholic concept of communion — in which worshipers believe they are eating the actual body of Christ — on a recent episode of the Late Late Show on Ireland’s RTÉ television. In a nation where blasphemy laws still exist, priests aren’t handling the humor very well.

The “offensive” comments were made by David Chambers, a man who goes by the name “Blindboy Boatclub” and is in a comedy group called The Rubberbandits. (He’s the guy in the mask.) 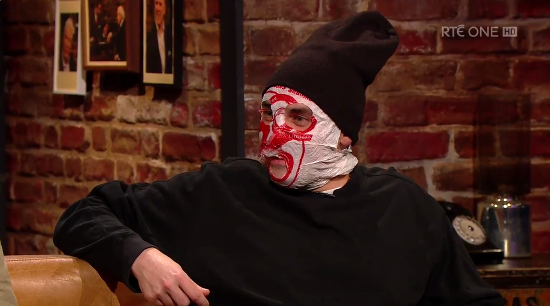 [HOST] RYAN TUBRIDY: The “haunted bread” is a great expression.

CHAMBERS: Well, that’s what it is!

Then they got to discussing why the bread might be considered “haunted”:

TUBRIDY: I never thought of it as cannibalism, but when you think it through… maybe that’s what was happening.

CHAMBERS: The language doesn’t want us to use critical thinking about it, but I mean they’re asking us to eat the ghost of a 2,000-year-old carpenter, you know? And then, at the same time, He’s not only a ghost, but He’s actually real. So it’s a ghost, and it’s human flesh at the same time, and He’s 2,000 years old.

TUBRIDY: I cannot tell you how melted my head is…

And just like that, parish priest Father Kevin McNamara has filed a formal complaint with the Broadcasting Authority of Ireland, as if there was any reason for him to be upset.

“We live in an age where there is great emphasis on the need for clean air, clean water and a healthy environment, but how much attention do we give to fostering a clean soul, heart and mind?,” began the priest’s address in this morning’s newsletter to parishioners, in the large farmland parish.

“Isn’t it time we paid attention to creating a clean environment for soul, heart and mind?” Fr McNamara asked parishioners, adding: “It hurt me beyond words to see the Eucharist ridiculed on RTÉ’s so called flagship chat show.”

“I have made a complaint to the Broadcasting Authority,” the priest informed his parishioners at the Church of the Assumption.

What exactly is he complaining about? Mockery? Disagreement? At no point did Chambers say Catholics shouldn’t be allowed to have communion; he just echoed what so many non-believers think the first time they learn what Catholics actually believe about communion: You can’t be serious.

People deserve respect. Their absurd beliefs do not. And the Catholic belief that they’re literally eating the body of Christ via a consecrated communion wafer is ridiculous.

It’s unclear if the government will take any action on this, but the fact that the possibility even hangs in the air is frightening. Then again, the bigger an issue this becomes, the more conversations Irish people will have about what Catholics truly believe. And those kinds of illuminating discussions never bode well for the Church.