Some Lawmakers Hope to Pass Legislation Equating Abortion with Murder

As President-elect Donald Trump prepares to take the highest office in the land, some state legislators are launching anti-choice measures that treat abortions as murder. 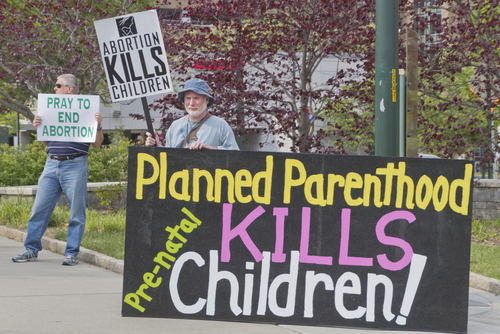 During his campaign, Trump told MSNBC’s Chris Matthews that “there has to be some form of punishment” for women who have abortions. Now some states, including Idaho and Indiana, are considering legislation that would make that off-the-cuff remark a grave reality.

H.B. 1134 also includes a provision stating that any regulation of the U.S. government that fails to adhere to Indiana’s standard for the beginning of human life is “null, void, and unenforceable” in the state. The bill’s authors could have been referencing Roe v. Wade, which protects a woman’s right to choose and has also come under fire from Trump.

This is especially terrifying considering the fact that Republicans have a strong majority in Indiana’s state legislature.

Idaho’s version of the abortion-is-murder bill is still being drafted, but Sen. Dan Foreman said in an interview that he won’t back down from the issue. In his proposal, there would be an exception if the woman’s life is at risk, but not for rape or incest.

Foreman said the bill is in its “embryonic stage.”

The bad news is there are politicians who hope to take away a woman’s right to choose, taking us back 50 years in terms of civil rights. The good news is none of these laws have been enacted, so there’s time to stop them. Call or write your legislators. Speak out. Be an activist.