On the Tonight Show, Comedian Nick Thune Joked About What He’d Say As a Christian Youth Pastor January 13, 2017 Hemant Mehta

On the Tonight Show, Comedian Nick Thune Joked About What He’d Say As a Christian Youth Pastor

On last night’s Tonight Show, comedian Nick Thune spent four minutes mocking Christian culture by talking about how what he would say if he ever became a youth pastor (“They would hire me based on my beard alone”).

It’s not mean-spirited at all — I’m sure Christians would laugh at it, too — but it perfectly captures the lofty-but-empty rhetoric common to so many churches. 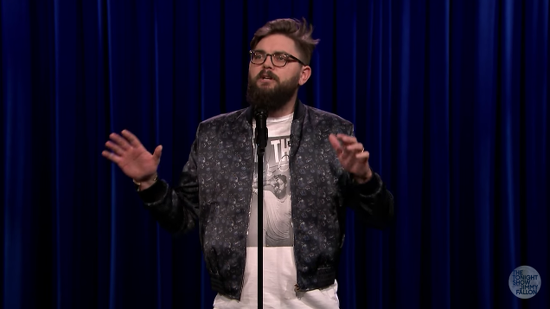 Now let’s all sing something joyful like “Nothing but the Blood of Jesus.”

January 13, 2017
A Utah Elementary School is Now Home to an After School Satan Club. (Thanks, Christians!)
Next Post

January 13, 2017 Flight 666 to HEL on Friday the 13th Has Landed Safely
Browse Our Archives
What Are Your Thoughts?leave a comment