Open Doors USA, a non-profit group that tracks (legitimate) Christian persecution around the world and helps Christians in need, released its annual World Watch List yesterday, highlighting the “50 countries where Christians face the most severe persecution for their faith.”

Incredibly (to the surprise of Religion Right leaders, I’m sure), the United States didn’t make the cut: 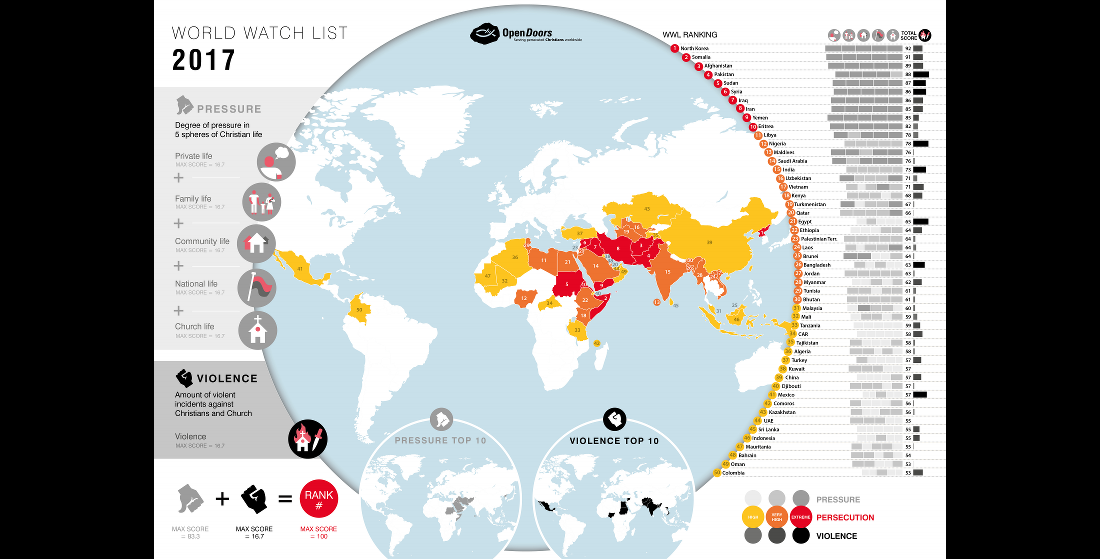 If you listen to right-wing demagogues, you’d think American evangelicals are persecuted in a way seen nowhere else in the world. The reality is that they don’t even crack the top 50.

Christians have actual reasons to be concerned in certain parts of the world where religious freedom is a farce:

Islamic oppression remains the most common cause of pressure against Christians and it is rising most sharply in Africa, where more people are killed for their Christian faith than anywhere else in the world. As extremist Islam spreads across Africa westwards from Somalia, almost every country from Kenya upwards is affected.

An increasingly common form of religious persecution is the deliberate sabotage of homes, churches and villages by extremists aiming to eradicate Christianity from a particular area. This is widely seen in northern Nigeria, Syria and Iraq where, after people have been driven out, homes have been ransacked, churches destroyed and village water sources poisoned.

It’s not just Islamic nations. India is a particularly bad place to be a Christian, due to the violence of extremist Hindu groups. China, too, with its Communism.

Like any other decent person, I condemn this (actual) persecution wholeheartedly. Christians should be allowed to practice their faith in peace and all of us should be horrified by the fact that they can’t. If (actual) religious freedom isn’t applied to everyone, it’s a problem for all of us.

(via Christianity Today, a publication that believes committed gay and lesbian couples are “destructive to society.” Large portions of this article were published earlier)

January 12, 2017
An Ex-Muslim Talks About the Islamic Hypocrisy She Witnessed During Her Childhood
Next Post

January 12, 2017 Tennessee Legislator Files Bill to Put "In God We Trust" On All License Plates
Browse Our Archives
What Are Your Thoughts?leave a comment