Samantha Bee on Jeff Sessions: How Do You Screw Up the Question “Can Non-Religious People Think?” January 12, 2017 Hemant Mehta

Samantha Bee on Jeff Sessions: How Do You Screw Up the Question “Can Non-Religious People Think?”

On last night’s Full Frontal, Samantha Bee delivered a blistering critique of Sen. Jeff Sessions and his confirmation hearings to become the next Attorney General.

While most of the segment focused on the accusations of racism that have followed Sessions throughout his career, Bee noted that she wasn’t as concerned with things he said decades ago compared to things he said during his hearing this week. That included his remark that atheists weren’t capable of understanding truth. 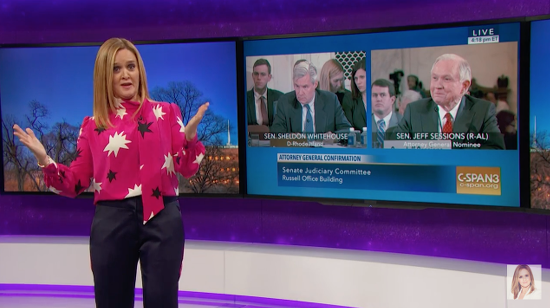 Cheese and crackers, Jeff! How do you flub the question on, “Can non-religious people think?” You sound a lot like a guy with a history of overlooking black voter suppression while requesting the feds help in stopping civil rights violations against Christian voters.

Even days later, Sessions’ response to that question is baffling. Other conservative Christians would’ve easily said we all have ways of discovering the truth but they would fight for the rights of atheists and work to protect the First Amendment. If Sessions couldn’t bullshit his way out of that one, what’s going to happen when he has real responsibilities?

January 12, 2017
Once Again, a Darwin Day Resolution Has Been Filed in the House of Representatives
Next Post

January 12, 2017 Lesbian Couple Will Serve as Co-Pastors at a Progressive Baptist Church in D.C.
Browse Our Archives
What Are Your Thoughts?leave a comment