Of the many highlights from Sen. Jeff Session‘s confirmation hearings to become our next Attorney General, perhaps the most relevant to readers of this site was the question Sen. Sheldon Whitehouse (D-RI) asked him, in a roundabout way, about church/state separation.

A little background helps. During the Republican National Convention this past summer, Sessions criticized Supreme Court Justice Sonia Sotomayor for her alleged irreligiosity:

It was bad enough that Sessions misrepresented Sotomayor’s religious views. (She’s a Roman Catholic who believes in God.) But this idea that disbelief in God meant you couldn’t tell right from wrong? That there was no such thing as truth? It was the sort of ignorant attack against Secular Americans that the Christian Right loves to make.

And thankfully, Sen. Whitehouse was willing to ask Sessions about that remark. It happens around the 2:45 mark of the video below: 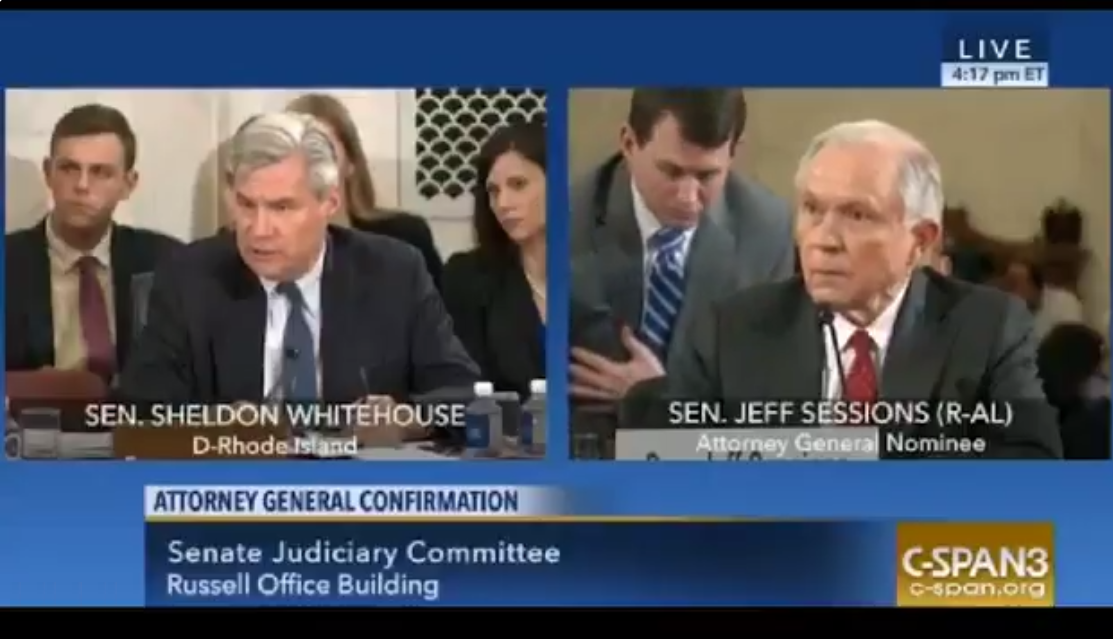 WHITEHOUSE: Does a secular attorney have anything to fear from an Attorney General Sessions in the Department of Justice?

SESSIONS: Well, no… and I use that word in the 90,000-foot level. A little concern I have that we as a nation, I believe, are reaching a level in which truth is not sufficiently respected, that the very idea of truth is not believed to be real, and that all of life is just a matter of your perspective and my perspective, which I think is contrary to the American heritage…

We are not a theocracy. Nobody should be required to believe anything. I share Thomas Jefferson’s words on the memorial over here: I swear eternal hostility over any domination of the mind of man. And I think we should respect people’s views and not demand any kind of religious test for holding office.

WHITEHOUSE: And a secular person has just as good a claim to understanding the truth as a person who is religious, correct?

What a weird way to answer the question… as if people with disparate, contradictory religious views can claim to have an honest understanding of how the world works, but not those of us who rely on science and reason?

Give me a break. Religion constantly plays catch-up to science, not the other way around. But that’s besides the point. Sessions may say we’re not a theocracy, but he believes in the superiority of religious beliefs. Atheism, to him, is a black mark on someone’s character — and that suggests he’d be on the wrong side of church/state separation issues if given the chance to lead the Department of Justice.

It was a softball question and Sessions made it sound like the most awkward response ever to a girlfriend asking him “Do you love me?” You don’t hesitate. You just say yes. Anything else makes us question what the hell is wrong with you.

Slate‘s Dahlia Lithwick said that the exchange “demonstrated that the views that Sessions is hiding are absolutely inimical to the democratic values of many members of the Senate and a large portion of the country.”

Huge thanks to Sen. Whitehouse for asking that seemingly throwaway question. It may have been more revealing than all of Sessions’ other denials and monologues.