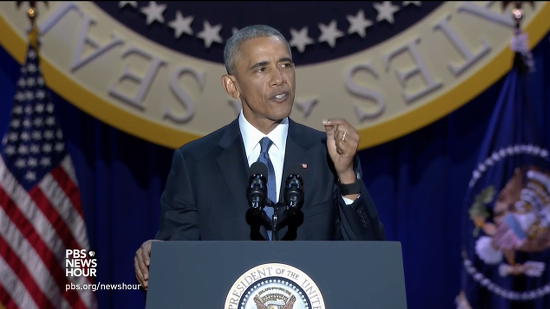 Obama, giving his farewell address in Chicago, actually cautioned citizens to beware of confirmation bias when it comes to new ideas, saying the evidence, not the propaganda, is what matters.

And increasingly we become so secure in our bubbles that we start accepting only information, whether it’s true or not, that fits our opinions, instead of basing our opinions on the evidence that is out there.

Obama added that the trend toward confirmation bias represents a “threat to our democracy.”

That’s how our democracy was designed. In the course of a healthy debate, we prioritize different goals, and the different means of reaching them. But without some common baseline of facts, without a willingness to admit new information and concede that your opponent might be making a fair point, and that science and reason matter, then we’re going to keep talking past each other.

Obama’s comments came almost in tandem with President-elect Donald J. Trump‘s attempts to smear recent (unconfirmed) intelligence reports as “FAKE NEWS — A TOTAL POLITICAL WITH HUNT!” I responded to Trump’s tweet here and here, but this certainly isn’t the first time he has fostered a distrust in damning reports.

With Trump encouraging people to question only media that reports anything critical of him, there is no better time for Obama to remind Americans what true, reasonable skepticism looks like. He sprinkled in a note of optimism, too.

Let me tell you, this generation coming up — unselfish, altruistic, creative, patriotic — I’ve seen you in every corner of the country. You believe in a fair, and just, and inclusive America; you know that constant change has been America’s hallmark, that it’s not something to fear but something to embrace, you are willing to carry this hard work of democracy forward. You’ll soon outnumber any of us, and I believe as a result the future is in good hands.

Obama’s comments on reason, progress, science, and facts couldn’t have come at a better time. In the age of information, we have also seen the rise of disinformation like never before. From “Pizzagate” to Hillary Clinton’s alleged body doubles, we have seen how quickly simple false claims can turn into nonsense beliefs on a massive (and fatal) scale. I just hope Americans will heed Obama’s warnings and hold all politicians accountable for their false claims.

January 11, 2017
Warren Allen Smith, Author of Who's Who in Hell, Has Died
Next Post

January 11, 2017 Jeff Sessions Goes Blank When Asked if Secular Americans Can Understand the Concept of Truth
Browse Our Archives
What Are Your Thoughts?leave a comment