Bryan Fischer: I Never Called Opponents of Christianity Traitors (Spoiler: He Did and It’s On Tape) January 10, 2017 Hemant Mehta

Bryan Fischer: I Never Called Opponents of Christianity Traitors (Spoiler: He Did and It’s On Tape)

Just a few days ago, Religious Right activist Bryan Fischer said on his American Family Radio show that anyone who opposes or criticizes Christian influence in the U.S. is automatically a traitor. 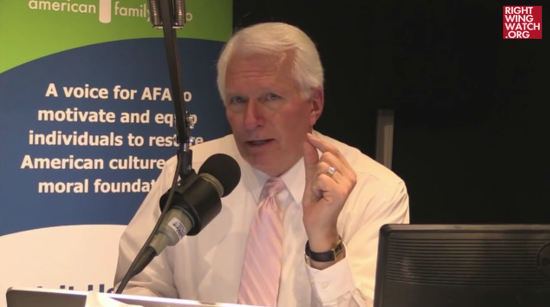 He pointed to George Washington‘s farewell address, in which the first President said, “Of all the dispositions and habits which lead to political prosperity, Religion and morality are indispensable supports,” and those who fight against those two ideas are not patriots. Others would interpret that as saying those who fight against freedom of religion are going against what the Founders specifically talked about in the First Amendment.

Not Fischer. He assumed “religion and morality” were only referring to Christianity, Establishment Clause be damned, and those who worked to lessen the promotion of Christianity throughout the country were not patriots.

Washington’s point, Fischer insisted, was that only “sincerely devoted followers of Jesus Christ” can be considered to be patriots, while those who criticize or oppose Christianity or seek to curtail its influence upon society are nothing but “traitors.”

“I have no hesitation in saying that today,” Fischer said. “You want to find a traitor to your country, find somebody who is actively working to oppose Christianity and oppose the public acknowledgement of the Ten Commandments; you are looking, my friend, right there at an American traitor.”

Fischer’s not quoting Washington in that second paragraph. He’s saying it in his own words.

Yet after media outlets reported on it — quoting him verbatim, I might add — he backtracked on his radio show yesterday, acting like this was all some sort of conspiracy.

First of all, he did say that. He misinterpreted Washington, and then said he agreed with it.

More importantly, even if he didn’t say it, note that he’s not refuting what he claims Washington said. It’s not like he’s responding with, “Washington said those who oppose Christianity are traitors, not me! I don’t agree with that at all!” He’s leaving that last part off. On purpose. Because that’s exactly how he feels.