Christian Show Host: Gay People Should Be “Disqualified” From Teaching Due To Their “Immorality” January 9, 2017 Hemant Mehta

Christian Show Host: Gay People Should Be “Disqualified” From Teaching Due To Their “Immorality”

Christian talk show host (and former Colorado State Rep.) Gordon Klingenschmitt said recently that gay teachers shouldn’t be allowed to work in public schools. Instead, they “should be disqualified immediately because of their immorality.” 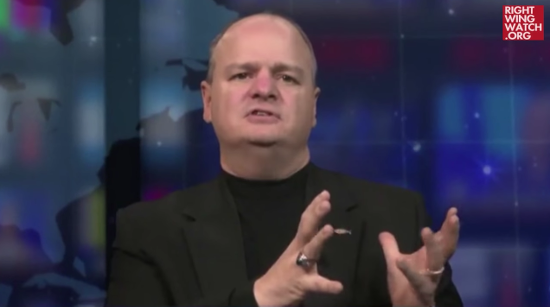 He made the declaration after talking about a gay Minnesota couple that allegedly molested several boys before killing themselves last year.

“As a culture now, the demonic spirit of homosexuality has taken over and redefined marriage, particularly in Minnesota, to tell these boys that it is okay,” he said. “And the demonic spirit of deception has taken over the school board or whoever decided, maybe the principal, decided to hire these child abusers to teach elementary school. Well, if anything, they should have been disqualified immediately because of their immorality, because the immorality inside of these two men are indicators that they are unfit to be a good example to little children.”

“This is evil upon evil and it’s not just these two men who are at fault,” Klingenschmitt added. “It is our laws as a society that need to be changed to prevent and protect children from this kind of abuse in the future.”

Of course! If only the school board and principal had said no to hiring child molesters, this never would’ve happened! They should really make the “Are you a pedophile?” question the first one on the application.

This is actually an unusual story because when we typically hear about teachers sexually assaulting students, it’s a male teacher going after a female student (or vice versa). But I don’t recall Klingenschmitt ever saying schools should stop hiring straight teachers.

More to the point, how would Klingenschmitt stop gay teachers from entering the workforce even if that were legal? Should administrators start asking all potential teachers about their sex lives? “Tell me who you’ve been inside and then we’ll talk about which classes you’ll teach.”

If “immoral” teachers are his concern, then what about divorced people? Muslims? Atheists? Those who had pre-marital sex? Should they be disqualified, too? You never hear those videos coming from the Religious Right.

Klingenschmitt is just taking an isolated, extreme example of a situation that all decent people would denounce wholeheartedly, arguing that all gay people act the same way, then suggesting that laws should be passed to discriminate against all of them.

And this guy was an elected representative for years. He’s not even a fringe commentator; he’s just echoing what the loudest, bigoted Christians have been saying for decades.

If society treated Christians the way he treats gay people, he’d be crying persecution. Instead, he’s gleefully dishing out the hate in the name of Jesus.

January 9, 2017
The Governor of Massachusetts Should Veto a Bill Legitimizing Pseudoscience
Next Post

January 9, 2017 These Are Good Reasons to Leave the Mormon Church, Regardless of Theology
Browse Our Archives
What Are Your Thoughts?leave a comment